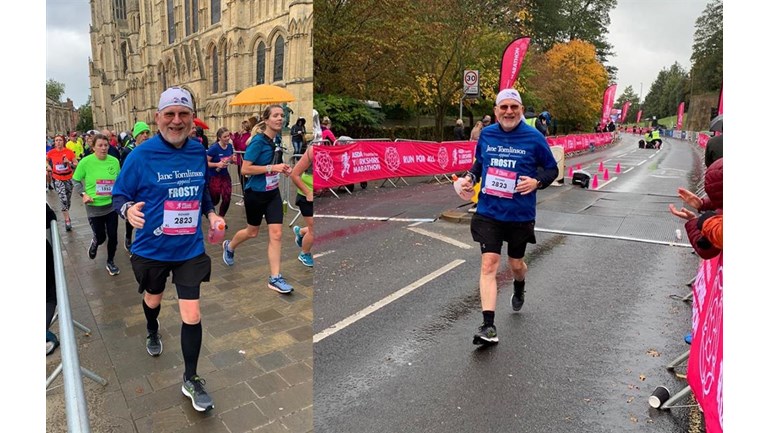 I am running two Ultras and a Marathon at age 58 for Jane Tomlinson Appeal because I want to fundraise for this fantastic charity.

I am running a set of increasingly challenging races in 2019 for a number of reasons, not the least of which is to raise money for the amazing Jane Tomlinson Appeal.

What a great deal. You sponsor one, you get 6 free!

What I am doing:

I am covering ALL the costs. The Jane Tomlinson Appeal provided a branded T Shirt to help with fundraising, and moral support. That is all.

I am doing this for two reasons...

I began in 2015 with gym work, dieting and managing my asthma, to the point where in 2016 I was able to run the York 10k in under one hour. Some of you may have sponsored me (for Macmillan) for that. If you did, thanks very much. Following that I upped my efforts and took on 10 mile distances in 2017. In 2018 I raised sponsorship for Macmillan again, this time for the Half Marathon distance. I completed two half marathons in Swansea and the Great North Run. My times were not that great, either side of the three hour mark and I did collapse at the end of the Swansea!

For 2019, I have already completed some races building up to the  really tough ones. Endure 24 is a 24 hour race around a 5 mile lap with 100m of ascent on each lap. As part of a team of 5 I have committed to completing three laps but have a goal of doing four, which would be 20 miles. Following that I will again be doing the Great North Run Half Marathon.

NEWSFLASH: I have added the Equinox 24 ultra event on 21/22 September. Tougher than Endure 24, this has longer laps (10km/6.2 miles) and a huge grassy hill! I am running as one of a pair and aim to do at least 4 laps, which would be marathon distance, over the 24 hours.

Far and away the greatest challenge for me this year will be the full length Yorkshire Marathon on Sunday October 20th. The race itself will be tough but the amount of training and long distance runs I will need to do to prepare for this, alone, will be incredible.

I am doing this anyway. I am doing it for my own well being and long term health. But if you generously sponsor me this would be a massive boost, knowing that you are supporting me and the Jane Tomlinson Appeal to help others to achieve great things too.

I decided in December 2018 that I would not cut my hair until I have completed my marathon. It acts as a daily reminder to me that I need to maintain focus, lose weight, train or go out and run, as part of my preparations. When you see me and head is shaved again, you will know I have completed my marathon. NEWSFLASH I could not cope running with the long hair so I shaved it at the end of August.

Many thanks for reading this far and considering my appeal.

The Jane Tomlinson Appeal is the legacy of the late inspirational Jane Tomlinson CBE and exists to support children’s health and wellbeing and to improve the lives of people with cancer.

Charity Registration No. 1113894
Find out more about charity fundraising