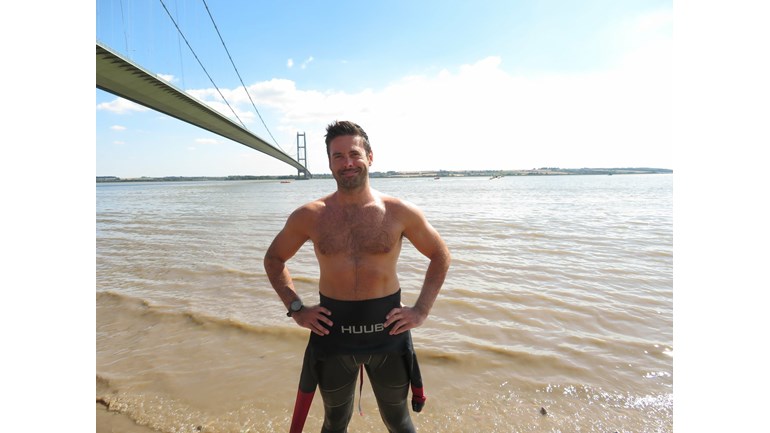 On 27th July 2019 Richard Royal aims to be the first person to swim the length of the Humber Bridge ... and back.

Starting at the Humber Rescue boathouse on the north bank of the River Humber, I will swim the approx 1.85km across the river to Barton-upon-Humber on the south bank and then back to the Humber Rescue centre, covering around 3.7km in total.

Whilst many people have swam across the Humber, either solo or in a group, at various points along the river, nobody has yet completed a two-way swim or established a recorded solo time in this location. I hope to be the first to complete this and to set a record for both a one-way and two-way swim at this section of the river.

The Hull Daily Mail describes the River Humber as being "as daunting a stretch of water as you could imagine. On a normal day it is vastly wide, murky and swirling with currents." According to Humber Rescue “it is the second most dangerous navigable estuary in the world after the Orinoco, in South America. With currents anything up to seven knots and sandbanks that can change almost daily, it is no place for the unwary.”

I'll be aiming to begin my swim as the river enters a short period of slack tide and the water flowing in from the North Sea slows, and aim to make the swim to the south bank and back in the short window of time before it starts rapidly flooding back into the sea, taking me with it!

I will be supported by Humber Rescue, a fantastic independent charity of volunteers which has kept us safe by providing fast-response search and rescue operations in the Humber region for nearly 30 years.  It is entirely dependent upon donations to continue supporting this vital service.

Last year I swam across the Humber under the bridge as part of a group raising money for Humber Rescue and I look forward to furthering this support this year.

I am a competitive swimmer and a member of Hull Masters Swimming Club and Humberside Water Polo Club. I swim regularly at local pools and open water venues including 8 Acre, Welton Waters and Billabong.

Last year I became the first person to swim from the Principality of Sealand (https://www.sealandgov.org/about/) to the mainland UK, a distance of 12km in the North Sea, and was subsequently awarded a Sealand Knighthood. A documentary video about the swim can be viewed here - https://www.youtube.com/watch?v=PsfDcHGSXwk

I have previously swam from Alcatraz to San Francisco, across the English Channel as part of a relay team, and have competed at the World and European Masters Swimming Championships in Slovenia, Budapest and London. My swims have helped to raise over £18,000 for charities including Aspire, Mind and Young Minds.

Charity Registration No. 702278
Find out more about charity fundraising