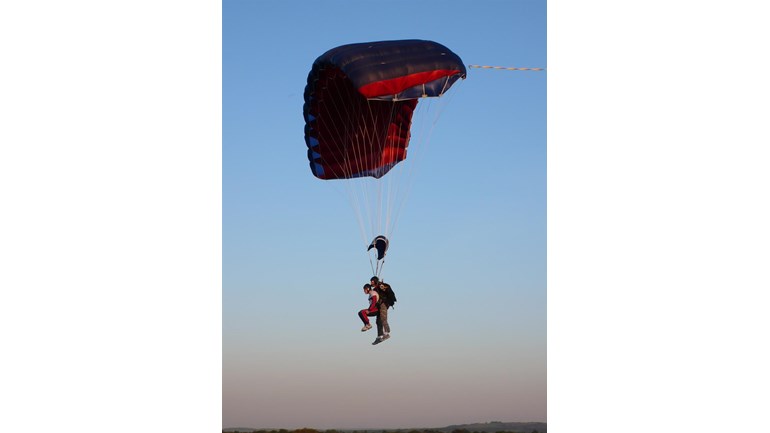 The Sky's the Limit!

Thank you for visiting our JustGiving page! We're seeking a new production fund to create more of the life changing theatre that we want to take across the UK in the coming years.
On September 12th and 13th many of our friends took part in all sorts of fundraising, to help us reach our target. Here's your chance to sponsor just a few of them here. Make sure you write in the message box which sponsored event the money is for.

Rob Gooch Skydived! On Sunday our stage manager Rob jumped out of an aeroplane, joined by three of our lovely members, and so far he has raised a whopping £1,385. He doesn't seem in a hurry to do it again.....

Snowy and Desmond perform at the top of mountains...Swine flu has caused a slight delay on this event. However a new date in October (16th and 17th) has been set when this expedition can take place. Assisted by veteran Riding Lights performers Desmond (the camel) and Snowy (the black sheep) et al, a team including Paul Burbridge and Kelvin Goodspeed will scale the tallest mountain in England, Scafell Pike, and perform and film their new version of the Hollywood epic The Ten Commandments. They are hoping their exploits of unprecedentedly ‘high’ theatre will raise £2,500 for the cause.

Sponsored 24 hour improthon …with no interval! Here at Friargate Theatre a team of caffeine fuelled actors worked through the day and night to keep themselves and us entertained with improvised comedy. The event was a huge success, and so far has raised over £1,000 for The Sky's the Limit. Well done to all for keeping the creativty and laughter going through the exhaustion.

Riding Lights Theatre Company is one of the UK’s most productive and long-established independent theatre companies. The company takes innovative, accessible theatre into all kinds of communities far and wide.