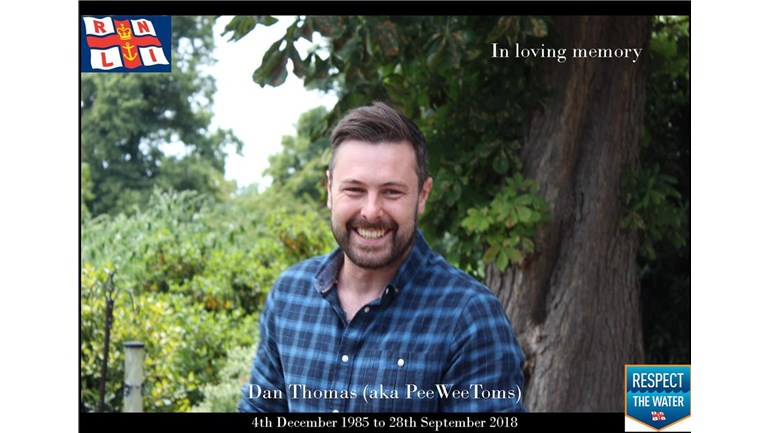 In aid of RNLI Weston-super-Mare

The RNLI is the charity that saves lives at sea.

It costs £447,000 a day, that’s £163.5 Million in 2018, to operate the charities lifesaving service. As a charity we are reliant on voluntary donations to power our lifesaving work which we provide through an army of volunteers.

On Saturday 8th June 2019, the ashes of Dan Thomas were scattered in Weston Bay by the volunteers of RNLI Weston-super-Mare, following his battle with cancer in September 2018.

Dan, from Dudley, West Midlands, was known for vlogging under the username ‘PeeWeeToms’ where his channel has more than 150,000 subscribers.

He began the account to provide "inspiration, motivation or some get up".

His mission was also to encourage people to go to the doctor if they were concerned about their health to nip serious illness in the bud.

He died of a rare terminal cancer called sarcomatoid carcinoma after first being diagnosed in July 2015 and had numerous surgeries and therapies. It was his own condition that he reported on in his clips.

His loyal followers would be told “don’t give up, don’t give in”.

One of Dan's favourite places to visit was Weston-super-Mare, especially around the Birnbeck Island and pier area.

In memory of Dan, his family asked for a video recording to be made of the ashes scattering ceremony by the Weston RNLI crew, to share with his followers on his page. They also asked for donations in Dan's memory to the Weston volunteers who are in desperate need of vital life-saving equipment and a new lifeboat station. This is because the old lifeboat station on Birnbeck Island became inaccessible due to the old pier being unsafe to walk on.

The RNLI volunteers have operated out of shipping containers on the seafront since 2014.

Please donate to our fund-raising efforts in support of the Weston RNLI volunteers in memory of Dan.

See the ashes ceremony video on https://www.youtube.com/user/peeweetoms or on Facebook at www.facebook.com/RNLIWSM/.