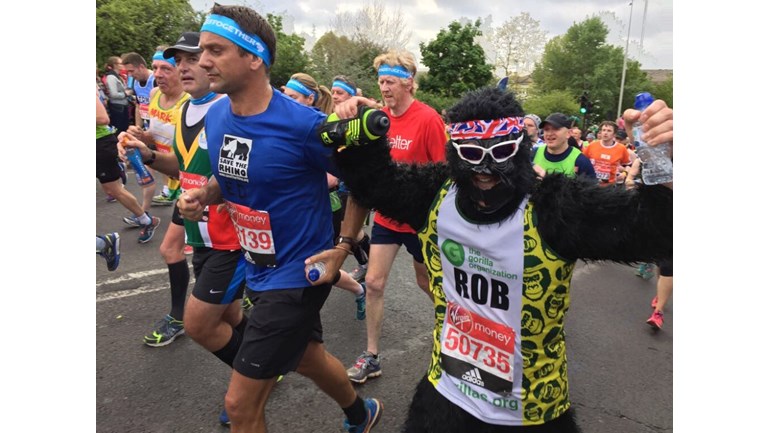 This 23 April 2017, I will not only be running the 26.2 miles of the London Marathon, BUT WILL BE RUNNING IT IN A FULL GORILLA SUIT.

Why (you may ask)? Contrary to popular belief it is not because I find running the inhumane distance of 26.2 miles too easy, but rather because I am raising money for the Gorilla Organisation (founded by the late Dian Fossey to help save the world's last remaining Mountain Gorillas). What better way (I hear you say) of doing it than in a gorilla suit?

There are fewer than 1,000 Mountain Gorillas (one of man's closest living relative) left in the entire World.

The Gorilla Organisation are at the forefront of numerous grassroots projects in Uganda, Rwanda, and the DRC, which work to tackle the key threats facing the Mountain Gorilla today. As well as supporting the vital (reactive) work that its rangers do in terms of protecting Gorillas from poachers' snares, the Gorilla Organisation also supports (proactive) projects to enable people to earn a sustainable income without having to rely on the natural resources found in the forest.

For more than two decades the Gorilla Organisation has worked to save the World's last few remaining Mountain Gorillas (and is a charity I have supported since adopting a gorilla at the age of 6), carrying on through genocide, natural disasters and war. It's projects have gone from strength to strength and have transformed the lives of thousands of people in some of Africa's poorest communities and building a brighter future for the Mountain Gorillas they live alongside.

And if nothing more, I do hope that the very fact that I am running the Marathon IN A GORILLA SUIT might tempt you into donating some spare cash.

With just over 1000 mountain gorillas left in the world and 3 subspecies now critically endangered it is vital we do everything we can to save gorillas from extinction. We protect them from poachers, safeguard their forest home and improve livelihoods in local communities. Will you join us?

Charity Registration No. 1117131
Find out more about charity fundraising