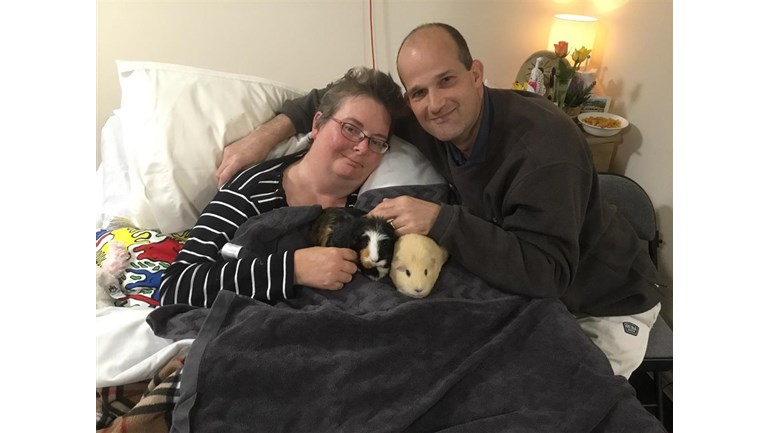 In November 2016 my aunt Sophie was diagnosed with having a GBM brain tumour and unfortunately the location of the tumour meant that it could not be operated on.  Despite being told that there was nothing that could be done she stuck with it and tried to make the best of the time she had left.  Never complaining she would say 'I have this tumour, I do not know why I have it but I do and there is nothing they can do about it so what is the point of worrying about it'.

She underwent radio therapy and chemo therapy, which was working well, but in March 2017 she was admitted to hospital with a very bad leg infection. This was the last time she was at home and the last time she was able to walk. My uncle, Alastair, stayed with her as much as he could, sleeping in the chair next to her bed.  As the infection improved Sophie was admitted to Oakhaven Hospice whilst Alastair tried to arrange for her to come home. Unfortunately this was not to be as my Aunt's care needs were more than my Uncle could give. In June last year Sophie moved to St George's nursing home where Alastair could be with her as much as possible.  Although they got out as much as they could one thing that was missing was being able to sit together or snuggle up to listen to music or watch a movie. The little things that couples take for granted. One of the care team noticed this and arranged for a larger bed to be put in the room. This meant that my Aunt and Uncle could at least have some 'normality' back.

Oakhaven Hospice staff saw the difference that this larger bed made to my Aunt's life, and with more young people being referred to the hospice, they asked if we could support their idea of getting a bed that can be converted to a larger bed so that couples can spend some quality time together during an illness.The staff have identified a bed that can be used as both a standard bed and a larger bed which will make so much difference to the lives of patients in the last days of their life.

Sophie died peacefully in Alastair's arms January 2018, with her beloved guinea pigs next to her. This would not have been possible if they did not have a larger bed, hence why we are fundraising for one for Oakhaven hospice so that others can benefit from it.

We need to raise around £6000 to get one bed as it needs to be to medical standard with the back rest, feet being able. Alastair has been fundraising by selling pottery he makes and putting on quizzes and is currently arranging a concert for December. Any help you feel you can give towards reaching our target would be really greatly appreciated.  Oakhaven hospice do an amazing job, but being able to have this new bed will enable them to improve some people's quality of life whilst they are in the hospice.Thank you for your support.

Oakhaven Hospice is a community based service providing specialist palliative care to patients facing a life limiting illness, running a traditional Inpatients Unit, Day Hospice and Hospice at Home Service. It costs £4.8 million annually to run the Hospice, with just 14% of this being met by NHS

Charity Registration No. 900215
Find out more about charity fundraising