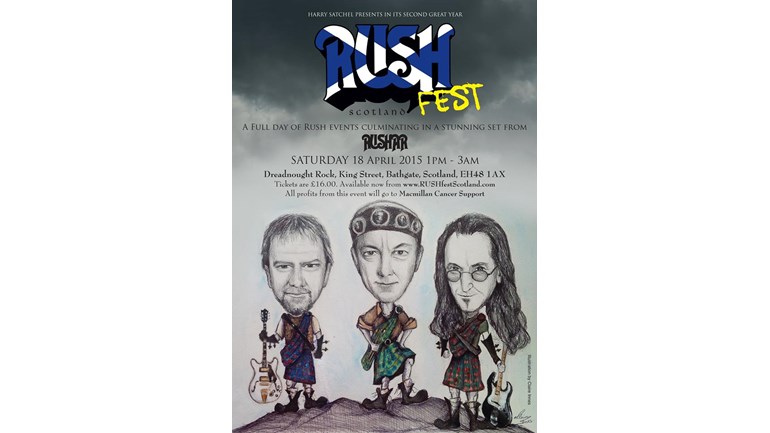 This is your unique chance to WIN a rare bottle of 12 year old Macallan Whisky, signed by RUSH drummer Neil Peart, and support Macmillan Cancer Support.
This is a one-off unique opportunity, from RUSHfest Scotland, for you to own a bottle of 12 year old Macallan whisky signed by renowned RUSH drummer Neil Peart!!   This is a worldwide prize draw to help raise funds for Macmillan Cancer Support.     YOU MUST READ read the IMPORTANT parts below about Gift Aid and RUSHfest Scotland contacting you, before donating your entry!!

RUSHfest Scotland (www.facebook.com/Rushfestscotland), is a Scottish convention for fans of the Canadian rock band RUSH.   The inaugural event was held on 17th May 2014.

The Macallan (www.themacallan.com) is one of the most highly regarded distillers in Scotland.

RUSH  (www.rush.com), in their career, have sold more than 40 million albums worldwide, and they have no plans to stop yet!!    Having missed out on celebrating the 40th Anniversary of their debut album, members, Neil Peart, Geddy Lee & Alex Lifeson are currently set to launch another world tour in 2015! …celebrating the 41st anniversary of that debut release.

The 12 year old Macallan, which will come with a letter of authenticity from Macallan, is no longer in production and sure to go up in value within the whisky collector community.   www.themacallan.com/the-whisky/sherry-oak/sherry-oak-12/

It is a well known fact amongst RUSH fans that Neil Peart’s favourite tipple after a show or a bike ride is a ‘wee measure’ of Macallan!   Here are just a couple of quotes from his self-penned travelogue  books...

“We were only starting a one night hike, but included in our provisions were the ingredients of a fine dinner, including a flask of The Macallan”

“In the early evening, I sat outside on the wooden deck with a glass of The Macallan, looking through the shadowy trees to a bright mountainside of barren rock catching the last rays of the sun”

‘RUSHfest Scotland’ and The Macallan would like to personally thank Neil Peart for signing the bottle to help raise funds for Macmillan Support and are aware that his own family has been tragically struck by Cancer in recent years.

To become the owner of this unique signed bottle, RUSHfest Scotland ask that you make a minimum donation of £5 using the donation link on this page.    The draw is open worldwide.    It is appreciated that you donate in £GBP, however if you donate in your local currency, a rough conversion  (www.xe.com) would mean 1 entry would be $8US, $9CAD or 6.50EUR.    For each £5/$8US/6.50EUR donation you will receive 1 entry to the prize draw.   If you would like 2 entries then please donate £10/$16US/13EUR and for 3 entries please donate £15/$24US/19.50EUR etc...

'The bottle' will be despatched securely and insured to the winner's address.

We have made an initial conservative target to raise £1000 but are hoping this will be exceeded and will be increased accordingly.   The ultimate target is infinite!!!   The draw will be video-ed and made at the RUSHfest Scotland event on 18th April 2015 at The Dreadnought Rock in Bathgate.

VERY IMPORTANT:   When asked if you'd like to add Gift Aid to your donation you MUST answer NO.    Gift Aid cannot be claimed on this prize draw.     Before clicking the final 'DONATE NOW' button you MUST 'edit' Gift Aid to ensure it is NOT to be claimed.

VERY VERY IMPORTANT:   You can remain anonymous on the page.    However, on the very final THANK YOU page you MUST  click “I am happy to be contacted by RUSHfest Scotland”. If you do not do this, you cannot be entered into the draw as we will not know how to contact you should you be the winner

Please note, due to the nature of the prize, this is an over 18's only draw.

Any questions can be made to gordonsmith63@btinternet.com