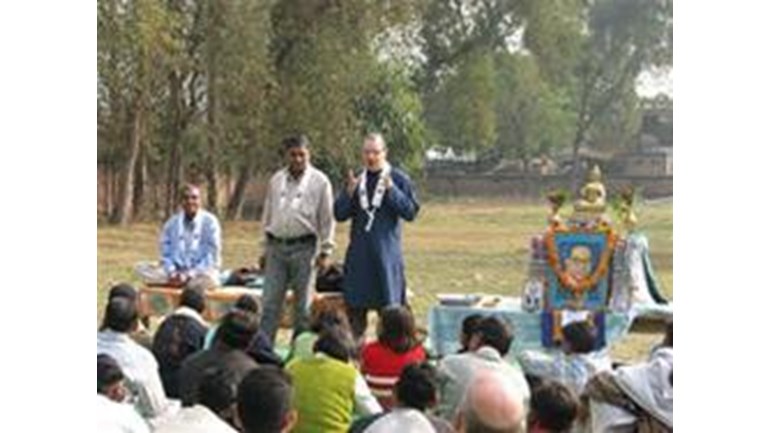 Welcome to The Dhammaloka Trust, Sarnath!

Sarnath is one of the Buddhist Holy Sites where thousands of International pilgrims visit every year to pay their respects.  It is where the Buddha first turned the Wheel of the Dharma by proclaiming the Way to Liberation and founded the Order of Bhikkhus.  FWBO/TBMSG has purchased land measuring about 2 acres at a prime location close to the Dhammekh Stupa and Archeological Museum in central Sarnath.

Based on the land, the Dhammaloka Trust's International Centre for Meditation, Inquiry and Compassionate Action was inaugurated by Dharmachari Lokamitra on 10th January 2004.

Dhammaloka's aim is to 'Cherish the Dharma' by various means such as teaching Meditation, classes, retreats, and seminars; by distributing publications; and by providing residential facilities, guidance and conditions to study the Dharma to worldwide pilgrims, local and Indian Buddhist communities and FWBO/TBMSG centers according to their needs and capacities. We would like to develop a state-of-the-art Buddhist study center with reference library and research facilities. Already many activities have taken place there - see further down for a summary.

Now we are appealing for funds to install a Buddha statue on the land and to improve the basic facilities so that we can use the land for ongoing Dhamma activities. To achieve this we need £3750. So, we invite you to contribute.

Specifically we need to create basic washing facilities on the land. This, and the Buddha statue, will help save the land from any encroachment - there have been attempts by local residents, including a tea shop at the entrance of land blocking the road.

Donating through JUSTGIVING is quick, easy and totally secure. It is also the most efficient way to sponsor the spread of the Buddha-Dhamma: FWBO (Dhammaloka) gets your money directly and, if you are a UK taxpayer, your gift is increased by the addition of 25% in Gift Aid, plus a 3% supplement.

Thank you for reading this.

Activities conducted by The Dhammaloka Trust:

There have been five annual Dhammaloka lectures. Their topics included ‘Buddhism and Social Change’, ‘Buddhism and Globalisation’,  ‘Buddhism and Environment’ and ‘Unity of Buddhism’. Key invited speakers were Lokamitra, Lokabandhu,  Bodhisagar, Ashvajit and Vishvapani.

Five annual residential retreats have been organised at Sarnath, led by Lokabandhu, Karunamati, Manidhamma, Vivekamitra, Vishvapani and Bodhisagar. Manidhamma led  retreats and workshops on Study Skills, Conditionality and Suttas from the Pali Canon at Sarnath, Bor-Dharan, Bhaja, Nagpur, Kondhanpur (Pune), Pune, Hyderabad, Warud and Yavatmal. These retreats were especially for Order Members and Mitras. Vivekamitra has led retreats in Tamilnadu and Bodhisagar in Uttaranchal and many places in Uttar Pradesh.

The Dhammaloka Trust has translated and published four major books: ‘Challenges of 2006’ by Subhuti (being a call to make the most of the 50th anniversary of Dr. Ambedkar's conversion), ’Ambedkar and Buddhism’, ‘ Vision and Transformation’, and ‘The Ten Pillars of Buddhism’ by Bhante Sangharakshita. ‘The Bodhisattva Ideal’, ‘The Three Jewels’ and ‘The Religion of Art’ are being translated. The Trust also contributed Rs 25,000 to the TBMSG Centre in Hyderabad and Rs 40,000 to TBMSG Yavatmal for publication and propagation of the Dhamma. This money was raised while Manidhamma was living at the London Buddhist Centre. Dhammamitra Sriniwas Rao started a book-stall at  the end of February 2008 to sell our publications and other Dhamma books at Sarnath.

There are now 15 local Mitras at Sarnath along with Dhammachari Shantighosh. Manidhamma  returned to India in December 2007 after spending six years in the UK. There are some regular visiting Order members, especially Bodhisagar, Siladitya and Vivekamitra, helping to grow the local Sangha.

Vivekamitra and Manidhamma have set up the Sangharakshita Vidyavardhini Scholarship Fund and helped  four students to complete their University education. One of the students is now working in the USA. Manidhamma raised funds to help Tsunami affected children in Tamil Nadu and fund-raised for two Order members to attend the International Order Convention in the UK in 2005. Manidhamma also donated Dhamma books to many Libraries and newly converted Buddhists from a tribal background, and has traveled to Hungary three times to teach about Dr Ambedkar to Roma Gypsies, who are inspired by Dr Ambedkar and Indian Buddhists.