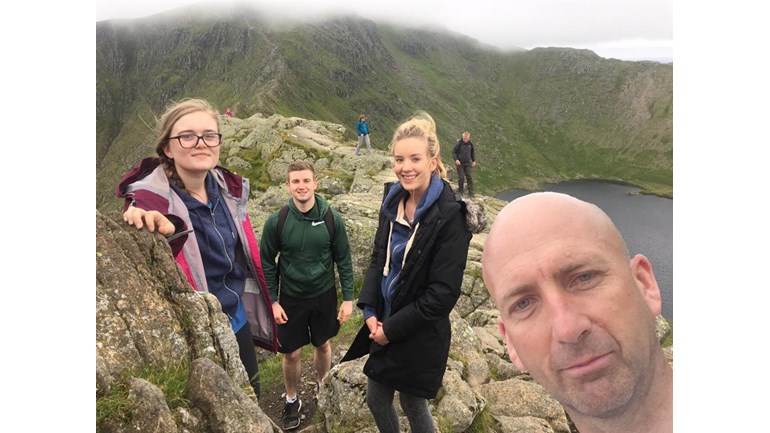 Three fingers and a thumb

I'll start by explaining the title. I had originally planned to take part in Tough Mudder Yorkshire 2017 with my girlfriend, brother and his fiancé. However, following some bad news (to follow), I was forced to make a tactical substitution, bringing in my dad (the thumb) to replace me. The reason for the missing finger will be explained in my story...

It all began in December 2013. I was perusing Loughborough University's fine selection of sport literature when a textbook fell from the library shelf beside me. As I bent down to pick it up, a bottle of Kirkland Signature Spring Water fell out of my rucksack, landing on my right little finger. My friend Reece exclaimed, "jeepers Sean, that must have hurt!" It did.

After 6 months of pain, suffering and loss of amenity, I was eventually referred to the Plastic Surgery department of Pinderfields Hospital. My consultant believed that the fingernail tissue had been "crushed to death" and had subsequently become infected. I underwent surgery to remove this 'infection' from my flaming phalange. The operation proved ineffective, so they tried again, and again, and again, and again. Five operations later, my finger now resembling a bulbous, burgundy bratwurst, things took a sinister turn.

In June 2016, I was diagnosed with epithelioid sarcoma; a rare, slow growing and aggressive cancer. My finger was amputated a week later. A suspect lymph node was also removed before I was eventually given the all-clear.

One year passed and things were going great. I'd got a GDL, an LPC, an MSc and even a DOG. However, following my most recent scan, I was told that the cancer had reappeared on my lung. Part of the lung will need to be removed, and to add insult to injury, I will need to cancel my travel plans for the month of freedom I have left before starting work.

The Teenage Cancer Trust Young Adult Unit at St James’ University Hospital ensures that the best possible care is provided to 17-24 year olds like myself. Although I'm lucky enough to have a network of friends and family who support (put up with) me every step of the way, some people are not. Please donate to ensure that every young person in the UK has access to the cancer care that they deserve.

Charity Registration No. 1062559
Find out more about charity fundraising