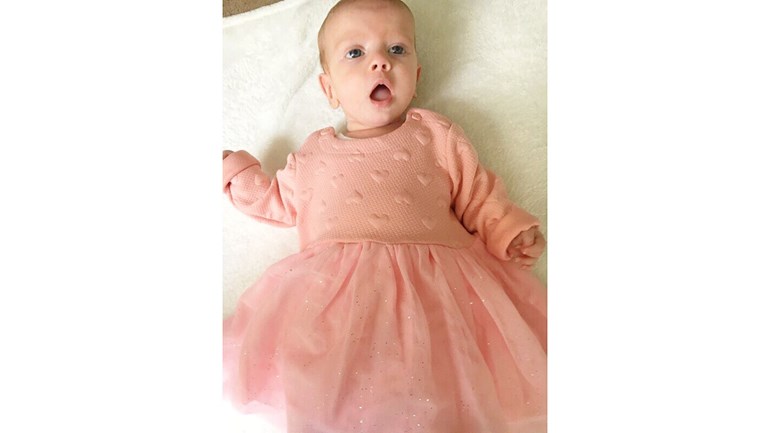 Raising money on behalf of Sofia Churchman for NKH Research

Joseph Michael Kendrick is 10 years old and has Non-Ketotic Hyperglycinemia, a rare genetic disorder that affects one in 60,000 new-borns. The condition is so serious that less than 500 people in the world are living with it. Joseph’s Goal has been set up to raise funds and awareness into NKH.

Sofia was born on 27/06/19 via cesarian. It was noticed, while in the recovery room, that Sofia was jerking her leg. After being checked over, we were told it was just a side effect of low blood sugars. We stayed  in hospital on the transitional ward for 3 nights. During this time, midwives raised their concerns over Sofia’s eye rolling. Again, after being checked over by three different peadrictians, we were told she was fine.

During our first few days at home, our community midwife also became concerned about Sofia’s eye movement. She was also still occasionally jerking her leg so I decided to take Sofia to the hospital to get her checked over. She had a blood test and we were told to video any jerkiness and eye rolling and come back in 4 days.

I managed to capture her jerking, this time it was both of her arms.

We presented the video to the Doctors at the Hospital and we were told Sofia had Benign Infantile myoclonus. This is a non serious spasming of the limbs when tired. We were told she would grow out of it in six months time and to keep an eye on it.

Two weeks later, when Sofia was two months old, we noticed that the innocent looking jerks had turned into something more arrgressive. Her entire body would stiffen and her eyes would roll at the same time. These appeared in clusters. We took her straight to A&E where she was diagnosed with Epilepsy instead of Benign infantile myoclonus.

We stayed in hospital and had a MMR and an EEG and were sent home with an anti seizure medication.

After another 3 hospital admissions over the course of 5 weeks we were eventually transferred to The Great North Children’s Hospital at The RVI in Newcastle to be under the care of a peadrician neurologist. We stayed here for 3 weeks.

After more tests including another EEG, ECG, blood test and a Lumbar Puncture, it was discovered that Sofia actually had an extremely rare disease called Non-ketotic hyperglycinemia (NKH for short).

NKH is a rare, life-limiting inherited disease characterised by accumulation of excess glycine in the body. Affected infants suffer epilepsy and profound delay in development and NKH is often fatal in early childhood. Approximately 1:76000 children get NKH. There is believed to be around 500 children worldwide currently with the disease.

We are raising money for Josephs Goal Charity. This Charity raise money for NKH research. All money raised by this charity is currently funding Prof. Nicolas Greene and his research his research team at UCL. He is the only person in the UK researching NKH treatments and cures, and is one of only three worldwide.

Joseph Michael Kendrick is 10 years old and has Non-Ketotic Hyperglycinemia, a rare genetic disorder that affects one in 60,000 new-borns. The condition is so serious that less than 500 people in the world are living with it. Joseph’s Goal has been set up to raise funds and awareness into NKH.

Charity Registration No. 1151548
Find out more about charity fundraising