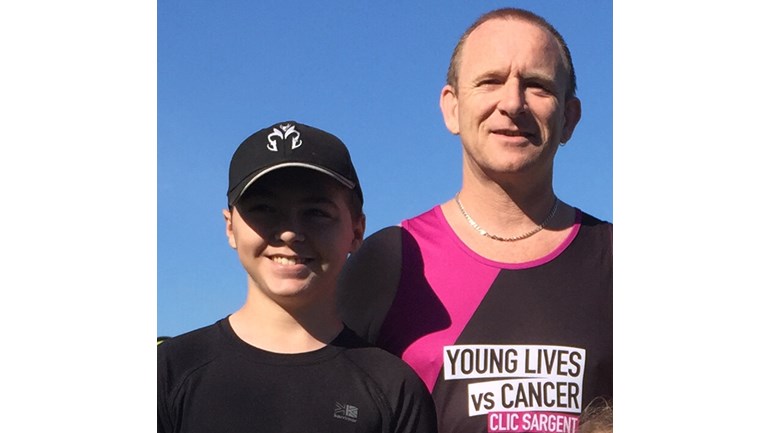 Please read this heartbreaking account which has inspired me to put my running to further a good cause.

Back in October/November 2016 my partners eldest son (then aged 12) had been complaining of headaches and nausea/being sick over a period of a couple of weeks and was having time off school as a result. After a few trips to see his neurologist it was put down to migraine (he had previously been diagnosed with focal cortical dysplasia causing epilepsy type symptoms).

On 29th November, Alex woke in the early hours of the morning screaming in pain, holding the right side of his head and vomiting/wretching. My partner finally settled him down with some painkillers (thinking it was another migraine) only to get up a couple of hours later to find him unresponsive and unable to wake up .

After checking him over My partner noticed he'd been sick in his sleep, his breathing was laboured and his right pupil had blown.... an ambulance was called straight away, who arrived very quickly, and he was taken straight down to Bristol Children's Hospital a&e. He was attached to many wires, a breathing tube inserted and taken for a CT scan and straight into emergency surgery. He'd had a bleed on the brain!

The next time My partner saw him was hours later in ICU. She was told by the surgeon that they removed the clot caused by the bleed along with a large mass, of which a biopsy was sent off for testing. It was in the same area as his cortical dysplasia!

He made a quick recovery and only spent 5 days in hospital, and didn't need any additional help. My partner was not 100% sure, and it's not been confirmed, but She is thinking that having the cortical dysplasia meant his brain had already rewired itself anyway... so he didn't need any form of rehabilitation.

A week after he was discharged we were called back into the hospital to see a doctor in Oncology for the results of the biopsy... We had heard that word before so We immediately knew what that meant! But We hoped it wasn't that... Then the doctor dealt the blow that's every mothers nightmare.... my child has cancer!!
He was diagnosed with a Grade 4 Glioblastoma... a fast growing aggressive brain tumour. We had no idea that it was lurking there, silently getting bigger!

Alex underwent a 6 week course of radiotherapy and oral chemotherapy (throughout which he dealt with it very well) which finished in February 2017, and in March 2017 he started receiving a higher dose of chemotherapy for a 5 day cycle every 28 days (12 cycles in total). Although he had days where he felt nauseous and tired, he's not letting it get him down, he told me it certainly wasn't going to let it get the better of him that's for sure!

The first of his follow-up MRI scans was in April 2017, which showed all was so far so good. In July 2017 Alex had another follow-up MRI scan, this showed treatment related changes (an after effect of the radiotherapy) but all was looking good still.

In September 2017 Alex started getting seizures again, but these ones were out of the ordinary... slightly different to ones he had experienced before, and was seen by one of his doctors. His 3rd follow-up MRI was brought forward as a result.

On the day he was due to start his 7th Chemo cycle (5th Oct) we were given the results of the scan.

We received the devastating news that the cancer had returned in 2 other areas of his brain.

It was in an area that is inoperable and the chemo treatment he was receiving hadn’t worked. Unfortunately there wasn’t any further treatment available to him and radiotherapy wasn’t possible as it had been less than year since he last received it.

All we could do was manage his seizures and keep him as well as possible for as long as we could.

We were told that we needed to make the most of the time we had and that they didn’t know for certain how long he had but they have said it’s months and not years.

So we set out writing a bucket list for him, and over the next 2 and half months we started ticking off each item.

By early December Alex was beginning to deteriorate and in his last few weeks he struggled and got frustrated with losing his mobility, his vision was failing and he struggled to talk and eventually was struggling with simple tasks like eating.

On 22nd Dec he had developed a chest infection and within the early hours of the 23rd he’d developed a fever and grew weaker as his body struggled to cope.

His breathing became so laboured and we were told by medics that he didn’t have long and he passed away in my partners arms just after 10pm at home on 23rd December 2017 with all his family around him and his favourite music playing, just how he wanted to go.

Please give whatever you can, your help is greatly appreciated. Thanks for taking the time to visit my JustGiving page.

Donating through JustGiving is simple, fast and totally secure. Your details are safe with JustGiving - they'll never sell them on or send unwanted emails. Once you donate, they'll send your money directly to the charity. So it's the most efficient way to donate - saving time and cutting costs for the charity..