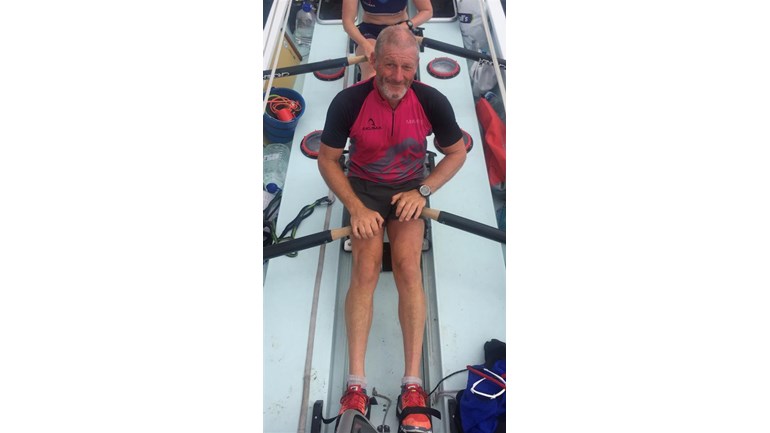 I am rowing across the Atlantic Ocean for Molly Olly's Wishes because realising 'wishes for kids' is great motivation.

Molly Olly's Wishes aim to support emotionally and financially, where appropriate, the lives of children 0-18years with terminal and life threatening illnesses throughout the UK.

Thank you for taking the time to have a look at this page.... Ill try and explain a little about me, The Challenge and my chosen charity: Molly Olly's Wishes.

In order of priority - I'm a Dad, 2 boys of my own and a step-daughter. All great kids (young adults!) with their own spirit of adventure. I live with my wife, Jules, near Warwick (a location furthest in all directions from the British Coastline, a fact not lost on me at this time!) and at the tender age of 48 I retired from work in 2016 affording me the time to take a running start and attack my 'bucket list'.

I've been lucky enough to have been involved in sport and adventure for pretty much all of my life. There are very few sports I haven't tried, but being a country boy at heart, I have always been at my happiest when putting myself to the test in the great outdoors.

For many years my first love was running. Team fell races, triathlons, marathons or racing on trails and Adventure Courses (Tough Guy, Hell Runner etc). Race preparation, team mechanics, the uncertainty of the elements and the simple challenges that endurance sport provides were the drivers for me. I've climbed and dived, skied and sailed and latterly, when my knees started to grumble about being launched off mountains!, I found rowing.

Indoor rowing pushed on an 'open door' with me and led, quite naturally to the water. I now row on one of the most picturesque rivers in the country at Warwick Boat Club, with an emphasis on single scull.

In 2015/16 I helped provide support to two crews rowing in the Talisker Whiskey Atlantic Challenge (Atlantic Crossing in a rowing boat),  In so doing they appear to have planted a seed in my mind about Ocean Rowing. (a niggly seed -  in fact more of an itch that needed scratching if I'm honest!) Consequently, when the opportunity arose to be part of a team Rowing the British Coastline, there was only going to be one answer...

So......In June of 2017 I joined a four person crew in Cowes on the Isle of Wight. We rowed along the south coast, around Cornwall, before heading north to South Wales and then a stunning night-time row across the Irish Sea. We travelled the entire length of Ireland before re-entering the Atlantic Ocean and a crossing to the simply stunning West Coast of Scotland. After 4 weeks of rowing we reached my 'journey's end" in Lochinver (It's at the top of Scotland - I didn't know either!)

A last minute call up then saw me re-join the boat on the East Coast of England and a further week of rowing, including a night in a Force 8 storm, saw us complete the circumnavigation of the Uk in Essex..... I guess that I was hooked.

I knew then that I wanted to Row an Ocean and set out to attain the qualifications and experience I would need to join a crew. In early 2018 I met Phil and Claire from Team Tyne Innovation, who later invited me to join them and Allan in entering the Talisker Whiskey Atlantic Challenge. TWAC is a rowing race from La Gomera in the Canary Island to Antigua in the Caribbean Sea, a distance of some 3000 nautical miles.

I had already trained with Allan in Scotland with a view to a pairs entry in the race but without hesitation we joined forces with Claire and Phil. We will be joined by 27 further boats in the race and all of us have one eye on setting a World Record for the fastest mixed crew to row the Atlantic!

The Race starts on 12th December and we will immediately adopt rowing shifts of 2Hrs On and 2Hrs Off for the entire crossing. We will eat rehydrated expedition food and desalinate water. We will share a single 'bucket' and life whilst simple, will become brutal as we battle with nature. We can expect to suffer sea-sickness, malnourishment due to the problems in replacing calories, fatigue and salt sores....

Sound fun?  Well it does to me and I really can't wait. This will be a truly life changing experience.

The fact that my family and I are all in good health, allowing me to take on this challenge has not escaped me either. The extreme tests I will put my body under are by choice and not fate.... They pale into insignificance with those undertaken by many young people who are faced with terminal or life threatening illness.

'Molly Olly's Wishes' is my chosen charity for this challenge and I need your help. Nothing will spur me on more when picking up the oars at 3am whilst being battered by waves in the middle of a storm in the Irish Sea than the knowledge that funds are being raised to support this wonderful charity.

Molly Olly's have a presence in hospitals and hospices through Great Britain and Ireland where they work to support children and their families. Their now very famous mascot 'Olly the Brave' is used to teach children about some of the challenges they may face. A small Olly will accompany me on board.

The charity also aims to make Wishes come true for children ......or as they put so eloquently - "Making the dark days brighter....' Molly Ollys have been hugely influential in the recent attainment of an assessment of 'Outstanding' by Birmingham Children's Hospital for its delivery of treatment and care.

Molly Olly's is a truly brilliant charity with a clear focus on making every pound of every donation work to achieve the greatest impact.

Please, please pop over to the Molly Ollys website and have a look at the work they do.... its impossible not to be moved and to re-evaluate your own position or circumstances....

I would be very grateful if you can dig deep or shallow and make a donation though this page... You really will be making a difference

Molly Olly's Wishes aim to support emotionally and financially, where appropriate, the lives of children 0-18years with terminal and life threatening illnesses throughout the UK.

Charity Registration No. 1145312
Find out more about charity fundraising