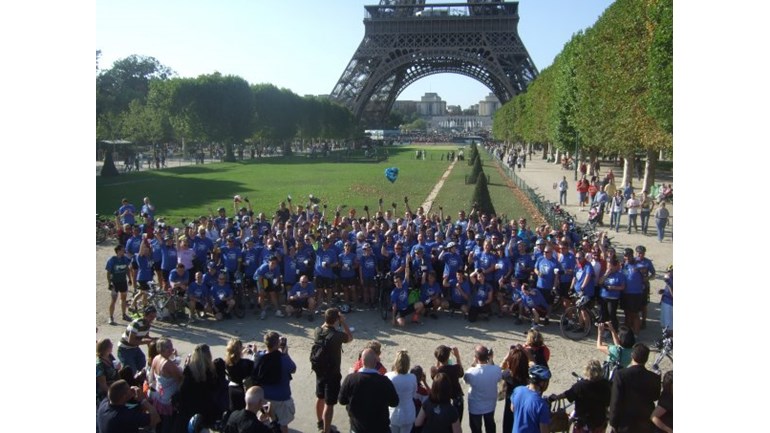 We create life-changing wishes to children with critical illnesses

Hi,
Thanks for visiting my fundraising page.

Donating through Justgiving is quick, easy and totally secure. It’s also the most efficient way to sponsor me: Make-A-Wish Foundation UK gets your money faster and, if you’re a UK taxpayer, Justgiving makes sure 25% in Gift Aid, plus a 3% supplement, are added to your donation.

So please sponsor me now!

We have now completed the 'challenge' and 'challenge' it was. Approximately 330 miles of stunning scenery, in the company of some of the most truly fantastic and genuine people you could every wish to meet. Each with their own stories to tell and heartfelt reasons for being there.

On top of this also the most varied assortment of bikes from second hand bangers to top end expensive models, mountain bikes, hybrids and road bikes, ('Trek' seem to have made a killing with their road bikes) and also a special mention to the guys on a tandem who where 'mad for it'!

The people who completed the course where as diverse and varied as you will find anywhere, from high-powered business people to, young lads and lasses, housewives, grandparents, city boys and so and so, all with the same goal and drive to finish. Some faster than others!

Riding in the saddle for up to 10 hours a day gives you plenty of time to reflect and think, mostly about what is hurting now and what will hurt next, followed by when the next break will be. Really bizarre that at one point we found ourselves saying things like 'great only 37 miles to lunch' and meaning it. Similarly, on the final day 'only 52 miles tomorrow!’ Was it tougher than I thought it was going to be..most definitely.

The support staff such as Sally, Eddy and the rest of the guys were also amazing, how they keep going 24/7 to make sure everything is set up and running smoothly, on only 3-4 hours sleep per day, I will never know, because I wasn't in the bar until 3am like they were!

Overall, the first 2 days where a real eye-opener, long, hot days in the seat over the biggest and longest hills I have ever seen, let alone conquered. Straight out of the gate the hills in Croydon are not to be messed with, especially after a big hearty 'Full English', (mistake number 1.) The flip side to this did mean a record beating 43.8 mph down the other side! (Eh, Craig)  The last 2 days where more rolling and rambling, but still with the odd 'undulation' thrown in for good measure, and don't even mention the wind.

The arrival in Paris with the crowds of people, families and loved ones waiting will never be forgotten and really do make the whole thing worthwhile, nearly everyone in the group asking what the next 'challenge' will be, next year.

I have made some really great friends and acquaintances along the way and hope that we stay in touch, able share our war stories for years to come. There where mishaps and accidents along the way, a lot of battered bodies and sore prides, especially where you get lost and spent a further 5 - 8 miles on the bike as an added bonus, the common equation seems to be that you are going to get a sore behind, whatever you do, so just grin and bear it.


London to Paris in September 2009

MANY THANKS FOR YOUR DONATION!

Since being established in the UK in 1986, Make-A-Wish has transformed the lives of more than 14,000 seriously ill children by turning their One True Wish into a reality. We receive no government funding, so rely on the generosity of our supporters to make these wishes come true.