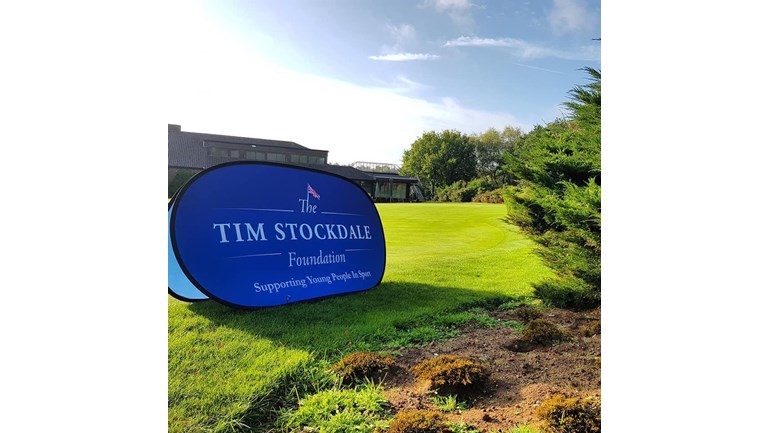 Tim Stockdale, champion showjumper whose view of life was "There's no such word as can't!", died aged 54, a month after being diagnosed with cancer. This campaign will set up a foundation as a legacy to his remarkable life.

My name is Laura Stockdale and my Husband Tim died last November,  it was just a month after being diagnosed with stomach cancer. It was a huge loss to our family and to the showjumping world.  Tim was a superb ambassador for his sport, not just as a rider but as a respected trainer and broadcaster too.

Tim had many great moments during his showjumping career, but one of his proudest was winning the Longines King George V Gold Cup at Hickstead in 2010, riding Fresh Direct Kalico Bay.

In his honour,  The Bunn Family, offered the use of their amazing showground to raise money to help young people in sport, we persuaded 250 people into running/walking half a mile in aid of The Tim Stockdale Foundation at the Longines Royal International Horse Show, Hickstead, in July.  My runners were.....

Thank you to everyone that helped raise a huge amount of money, £54,000 is absolutely incredible.

Other fundraising days have been happening too. This October my youngest son Mark Took part in a sponsored row.  His House at School, Cripps, rowed to Edinburgh on static machines to raise money for The Foundation.

We held a golf day at Woburn Golf Club in October and it was a huge success.

Friends, family and famous faces across the equestrian and cricket worlds tee’d off on the prestigious Duke’s course at Woburn golf club in Bedfordshire.

Guy Salmon Land Rover provided the incentive to hit a hole in one, a gleaming £50,000 new Evoque. Mojo Europe demonstrated how wearing a Mojo band can help by awarding prizes to, nearest the pin, longest drive and beat the Pro.

Charles Elliott of London managed to enhance the already beautiful surroundings by bringing along some stunning sculptures.

With such an array of sporting professionals it was always going to be a competitive day. Joe Stockdale was not going to let aspiring professional golfer, younger brother, Mark get the better of him! They were not the only ones practicing the night before, Brian Cassidy, Trevor Breen, Greg Broderick and Michael Duffy put a few holes in too. Clare Balding teamed up with partner Alice Arnold, Steven Wilde and Rupert Bell to put in a formidable challenge.

Rory Gilsenan did not let recent surgery stand in his way of a fun day out with friends and his brother, who flew over from Ireland to play.

Peter Charles brought his A team, Scott Brash, Harry Charles and Justin Bennett however they were beaten by George Mabbott, Donald Whittaker, Anthony Condon and Paul Cocoman to claim the “Rider Cup” trophy.

In addition to most sports, Tim loved to watch cricket, he was a regular at Northampton County Cricket ground so it was no surprise to see that Alastair Cook, James Taylor, Richard Levi and Steve Peters were among some of the many cricket stars and legends that supported the day.

Tim’s brother Ivan, had a very important job for the day driving the Booze Buggy around the course, assisted by  Showjumper, Will Fletcher.

Over 180 guests assembled for the prize giving dinner along with entertainment from Bob”The Cat”Bevan.

Rory Bremner who had the audience bidding against each other for some, Money Can’t Buy prizes in the Auction, commented that “you can feel the love for Tim and his family, in this room, it’s wonderful”. These included “A Day not to be missed” at Cheltenham Festival, courtesy of former jockey, Andrew Thornton who kindly donated another day to the delight of the other bidder.

The Foundation has focussed on fundraising in its first year. However now funds are available to be awarded in grants and bursaries to young people who need support in their chosen sport. An application form will be available to download and complete on the Tim Stockdale website. You can also email information@timstockdale.co.uk   All applications will be considered to help young people who want to participate in any sport.

We will planning more days for next year.

Tim Stockdale, champion showjumper whose view of life was "There's no such word as can't!", died aged 54, a month after being diagnosed with cancer. This campaign will set up a foundation as a legacy to his remarkable life.

Oxfordshire Community Foundation is a Charitable Incorporated Organisation (number 1151621) founded in 1995. It provides a practical and valuable alternative to setting up a registered charity or charitable foundation.

Charity Registration No. 1151621
Find out more about charity fundraising