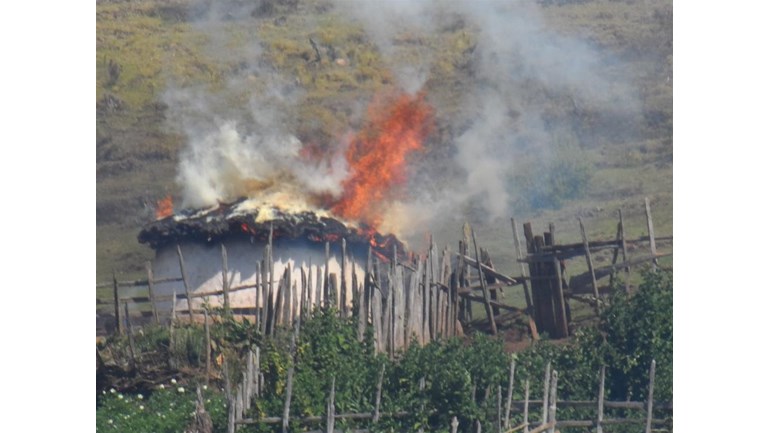 The Sengwer indigenous community of Embobut Forest in Kenya are being forcefully and illegally evicted from their ancestral forest lands by the Kenyan Government. To stop this, they urgently need funds to continue their legal battle.

Thank you for visiting this page.

Latest news from the ground:

“With the arrival of forest guards, families are running away from their homes. 12 guards all armed with AK 47 and G3 rifles were getting into peoples' houses. Homes are deserted. The guards shot one bullet in the air before getting into the forest. Lots of confusion, fear, desperation and hopelessness is seen amongst community members. One of the guards was telling fleeing families: ‘Get out of the forest’.”

Forest guards have been burning Sengwer houses, and we estimate that as many as 1000 homes have now been burnt.

One Sengwer woman’s home was still burning as she told us that she was hungry because they came to her home while she was making the morning meal an hour earlier, and she and her four small children had had to run. She came out of hiding and told us that:

"All school uniforms, cooking pans, water containers, cups were burnt. Now the children have to stay home while I find uniform and books. The children are very upset because we have lost everything. The children and elderly people will end up getting pneumonia because we don't have anything to cover ourselves at night"

This forced eviction is not only a severe violation of the Kenyan Constitution and international law on human rights, and on biodiversity conservation and sustainable use, but is also in contempt of an injunction secured at the High Court in Eldoret in March 2013 (extended on 21st November) which forbids any such evictions in Embobut until the issue of those Sengwer communities’ land rights is resolved.

According to the 2010 Kenya Constitution (Article 63) and international law, the indigenous Sengwer have the right to not be moved from their ancestral territories unless they have given their free, prior and informed consent.

For many years the Kenyan Government has been trying to remove the Sengwer from their ancestral land by burning their homes and food stores. They have done this in the name of a fortress conservation approach which seeks to remove local people from their lands, and which makes the environmental situation worse while creating a human rights crisis.

Funds are desperately needed to continue the legal effort to stop these appalling evictions now, and to ensure that Sengwer families can safely return to the forest.

For further background information on this case please visit:

For the full press statement of the Special Rapporteur on the rights of indigenous people, visit:

Forest Peoples Programme works with forest peoples to secure their rights, their territories and their livelihoods. We work to create political space for those peoples to control their lands and decide their own futures.