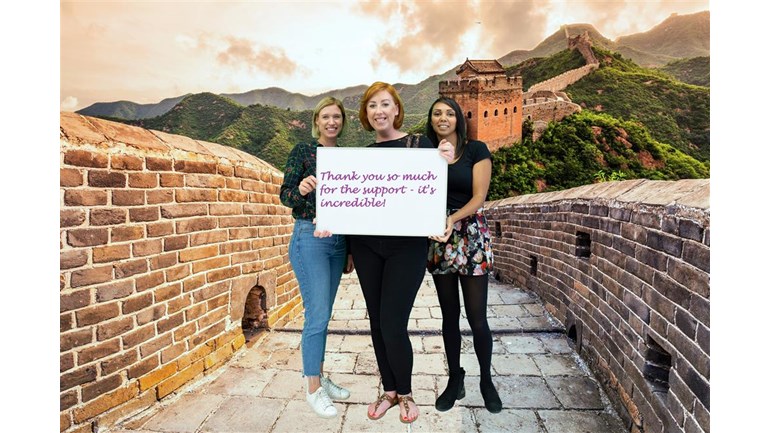 HDA England and Wales exists to support anyone who is affected by Huntington's disease. It pursues the best possible care; provides training & advice to families and professionals; raises awareness; and promotes research towards better treatment and ultimately a cure.

We wanted to give you all an update now it’s been a few weeks since we got back but we’re at a bit of a loss as to how to describe this experience. The whole journey we’ve been on, from first signing up to undertake the trek to sitting in an hourly rate motel in China with burning calves has totally exceeded our expectations (apparently the hourly rate motel is for drivers due to China’s size…). It’s been incredible, awe-inspiring and VERY emotional. We wouldn’t change one bit…scrap that, we weren’t fans of the cold showers so we’d change that but only that.

We were with a group of 12 fundraisers in total who all had their own story as to why they were there and raising money for various charities including Scotland’s HDA.

We quickly slipped into a daily routine of being late for 7am breakfast, setting off into the Beijing countryside with our lovely local guide Jason, mountain leader Lizzy and our bus driver Mr Djow (the pronunciation is VERY important as we awkwardly found out the word we were using meant something else entirely and was NOT complimentary!). Each day’s warm up consisted a mixture of Tai Chi and a new move for our dance troupe and then setting off on a climb up a mountain to The Wall. It was tough and felt relentless in parts but when we reached the top and looked back at what we’d achieved, the exhaustion fell away. The pictures will never do it justice as the views from the Wall were breath-taking, the rolling hills were vast and the Wall spiralled on as far as we could see. We walked for between 6-8 hours a day and at the end of the day, we sat round chatting, laughing about our MDF beds as the locals like a hard bed and sampling the local beer for £1.20 a bottle!

Over the five days, we walked over 70km and as a group raised over £30k for charity. It was the most tremendous thing we’ve ever been involved in so to finish the week in style, we did what any reasonable tourist in China would do…drank shots of Firewater and screeched our hearts out in a karaoke booth.

We are filled with absolute gratitude to each and every person that has helped us smash our goal, sent well wishes, been involved, agreed to be an unpaid PR manager and even bought us walking socks.

We will treasure the memories forever so THANK YOU for being part of that.

Where to begin? I guess I should start by telling you about Huntington’s disease (HD), the illness that took my Grandad Farry, Auntie Noreen and, most recently, my Auntie Catherine. You see Huntington’s disease has been a prominent and unwanted guest in my family. So, when the opportunity to raise money for the Huntington’s Disease Association, a charity that supports people like my family, I jumped at the chance.

I've seen the devastation that HD causes and I am continuing to see it in other loved ones who are battling the symptoms. What makes it even harder to cope with on an individual level is that you’re potentially seeing your own future. It’s a genetic condition, so any child that has a parent with Huntington’s disease has a 50/50 chance of inheriting it. The journalist Charles Sabrine has described HD as being a combination of Alzheimer’s, Parkinson’s, schizophrenia and cancer all rolled into one.

My dad was tested for Huntington’s disease a few years ago. He was diagnosed with the defective gene, however, I’m pleased to say he’s very well! It’s difficult to come to terms with the news that your parent has such a terrible disease. It’s a battle of emotions: you’re upset for what their future may hold but equally thinking, what does this mean for me? Should I get the test? How would I cope with knowing that I might get ill one day and who knows when? Will I spend the rest of my days having a perfectly normal twitch and worrying if this is the onset of symptoms?
In the summer of 2015, for many personal reasons, I decided to go ahead and get the predictive test. I contemplated this for a good while. The turning point was when I heard the quote, ‘fear can hold your prisoner, hope can set you free’. I didn’t want to be a prisoner of constant worry, which takes me to August 2015 and a medical waiting room, where I waited anxiously for my results.

That time was a complete blur. I just remember looking to my partner Lewis, with tears in my eyes as Alison, my counsellor, told us that my CAG count was 42. This meant that the gene was faulty and the prediction was that I would go on to develop the symptoms of Huntington’s disease. I remember fumbling for a box of chocolates I’d brought for Alison in my bag as a thank you for her support during the testing process before leaving St. Mary’s – all I could think was, oh my god, why did I do this and how do I tell my family? I can only describe it as devastating. The news, the implications, what it meant for my siblings, my parents, for Lewis, our future, my career. It was so overwhelming and just so sad.

The morning after, when normal service was meant to resume and I had to go back to work, I remember getting in the car and thinking, I can’t do this, and all of a sudden the sun shone on my face (a rarity in Manchester) as the Bob Marley line ‘Every little thing’s gonna be alright’ came on the radio I genuinely felt it was a sign. Someone was with me in spirit and helping me through my recent diagnosis. With time, I’ve come to terms with it and learned to accept the things I cannot change. By ‘worrying about tomorrow, you could ruin your today’ (I love a good quote). I also like to think that my gene mutation essentially means I’m one of the X-men but without the weird codename.

My wonderful best friend Sharlene has been a huge support, from being the first of my girlfriends to know my results and allowing me to sob like a baby, to coming with me to get a tattoo to represent hope. And even now she has agreed to undertake our Great Wall of China trek. I know she is truly one in a million and I’m so blessed to be surrounded by great friends and family like her. People like Katy, who I met last year on a YOLO holiday to Ibiza and instantly hit it off with, are supporting me. When she found out that we were doing the trek, she instantly wanted to join and even agreed to cry with me when I’m wandering along a wrecked path in China and contemplating the magnitude of what we’ve achieved.

I’ve always said that if I did have Huntington’s disease, I could contribute to research. Three years on, we’re still fundraising and I’ve participated in two medical research studies, in the hope that one day soon those clever scientists will find a cure and others won’t have to go through what our family has been through. By supporting our event and giving to the Huntington’s Disease Association, you are helping to contribute to a brighter future that’s filled with hope, and I want to thank you so much for helping us to achieve that.

Thanks for taking the time to read this post and visit our JustGiving page.

HDA England and Wales exists to support anyone who is affected by Huntington's disease. It pursues the best possible care; provides training & advice to families and professionals; raises awareness; and promotes research towards better treatment and ultimately a cure.

Charity Registration No. 296453
Find out more about charity fundraising