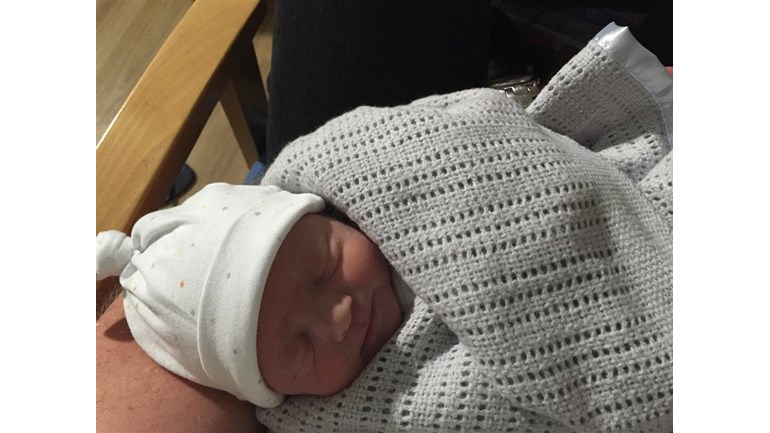 In memory of our beautiful Teddy

We were blessed with a beautiful baby boy on Monday 16th May 2016 at 6.45pm.  After a full term, healthy pregnancy and a natural labour we were delighted when Teddy arrived into the world weighing 6lb 2oz.  The little boy we had wanted for so badly was finally with us.

When Teddy was born, like many babies, he had a few breathing difficulties to start (nothing a rub down with a towel couldn't solve), so although he was slow to start we weren't worried and after a quick examination with the doctor our little bundle of perfection was handed to us.  We've never been happier or more complete, he made our hearts burst with pride.

We were transferred onto the ward at Royal Surrey hospital and after lots of cuddles decided to get some sleep. With Teddy tucked up in his cot next to us I simply had no concept of what was about to happen.  During the night at about 2am I was awoken by a midwife who told me she had to take Teddy as he was cold and non responsive, and in that same breath she disappeared with him. We sat up in bed and barely realised what was happening. Some time later we were moved to a room on our own where we were joined by Mr Moss from their Special Care Baby Unit. He explained that Teddy had stopped breathing, and had been rescucitated for 17 minutes before they had got him back. He was now on a ventilator and we were told that we had a very poorly little boy.  The happiest day of our lives had just transformed into every parents worst nightmare.

The following morning on Tuesday 17th May, Teddy was stabilised and transferred by specialist ambulance to St.Peters Hospital NICU.  When we first visited him it shocked us both, wires and tubes in his tummy, head, hands. There were monitors and machines all around him keeping his tiny body alive. Over the next three days we began to understand how each machine functioned, what it meant when numbers went up or down, and how very unwell our beautiful baby was.  The specialist team of consultants and nurses at St.Peter's worked tirelessly to ensure Teddy had the best care, the best chance and to try and find out why he had stopped breathing. Their care and commitment astounded us, and the love and kindness they showed to us and our family was unwavering.

On Thursday 19th May we learned that our perfect Teddy was not going to recover. He had shown no improvement and he had no function at all in his brain, he was deteriorating each day and the ventilator was doing all of the work for him. That evening at 8.20pm we had to let our beautiful little boy go; the single most heartbreaking thing any parent can do. Before we did, we wanted him to have the chance to be with his family; he had cuddles with us (the first proper time out of his tank for skin to skin cuddles), with his grandparents and his Aunty. We washed him, dressed him and all of the wires and tubes were finally taken away. Teddy was brought to us in the family room we were staying in, was wrapped in his blanket and handed to us as one of the nurses hand pumped oxygen into his lungs. As she stopped we both held him and read him a bedtime story as he slipped away peacefully, he was surrounded by his family and we know he felt that.

Teddy's life was short, but it has taught us so much. Not to take things for granted, not to assume (as we had) that every new parent gets to bring their beautiful baby home from hospital, not to fuss and fight about things that don't really matter.  We were blessed with Teddy, and will never forget him; he will always be talked about and so very loved.

As a thank you to all of the team at St. Peter's NICU we are aiming to raise as much money for them as we can, so they can continue to help babies like Teddy, and so that we might help prevent other parents going through what we have experienced. The unit looks after both premature and sick babies, and all the money raised goes into investing in equipment, staff training and improved services and facilities for families of the babies in the unit.  Anything we can achieve will never be enough to thank them for all they did for Teddy.

Previously called the Early Births Fund, the fund was set up in 2003 with the aim of raising £250,000 to provide additional intensive care cots for the Neonatal Intensive Care Unit. This goal was achieved in 2 short years. The fund has continued on to support babies, families & staff on the NICU.