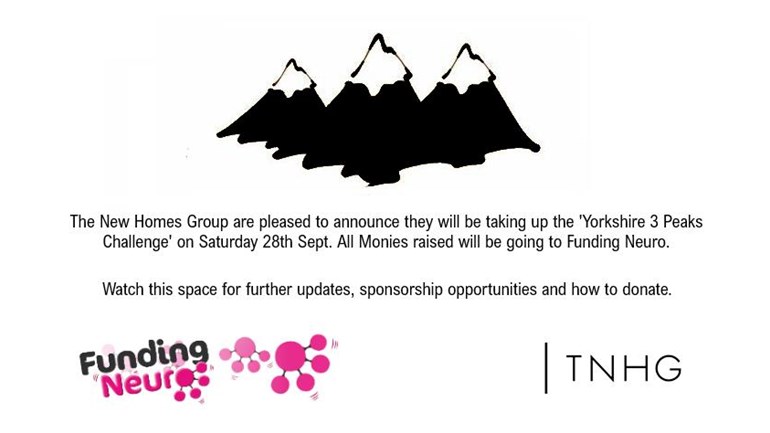 
A team of over 60 members from The New Homes Group, the UK’s leading new homes specialist, will be taking part in the Yorkshire Three Peaks Challenge next month to raise money for Funding Neuro.

The event, which takes place on Saturday 28th September, will see nine teams from across The New Homes Group, including housebuilder clients, Lloyds Banking Group, Barclays Bank and Nationwide Building Society, take on the 24 mile route – including an ascent of 5,200 ft - across the peaks of Pen-y-Ghent, Whernside and Ingleborough in the Yorkshire Dales National Park, in under 12 hours.

The team will be looking to raise awareness and as much money as possible for Funding Neuro, a charity that provides research and support to people with Brain Cancer, Parkinson’s and other neurological conditions. The New Homes Group has supported Funding Neuro since 2014:

“The teams are looking forward to taking on this challenge and both training for the day itself and fundraising is well underway with dress down days, cakes sales, raffles and other activities taking place,” says Terry Higgins, Managing Director at The New Homes Group. “We aim to raise as much money as possible for this important charity – a charity partnership that is very valuable to us and one we’ve partnered with for a number of years – and we are proud of our colleagues taking part and wish them the best of luck on the day.”


Funding Neuro are a national charity. Their aim is to accelerate the development of new treatments for many of the most serious neurological conditions. They do not focus on one single neurological condition nor do they duplicate the work being carried out by other charities. Instead they identify the issues that hinder progress, collaborate with others and find solutions so that research and innovative therapies can be accelerated. To do this they need to ensure that promising clinical research can find its way out of the lab and to the patient in the treatment room. By focusing on translating breakthrough research into breakthrough treatments, they believe they can revolutionise the effectiveness of neurological care.


Sharon Kane, CEO, Funding Neuro said
"The support from The New Homes Group, since 2014, has been invaluable to Funding Neuro. It has enabled us to support Professor Steven Gill with his reversal of Parkinson’s Disease and increase life expectancy for children with the universally fatal brain tumour DIPG. The three peaks challenge, in a beautiful part of the country, sounds fantastic and I’m very much looking forward to joining all of the teams for a race to the top! I would like to thank The New Homes group for organising the event, to the teams that are participating and everyone donating to support our vital work."

Charity Registration No. SC042061
Find out more about charity fundraising