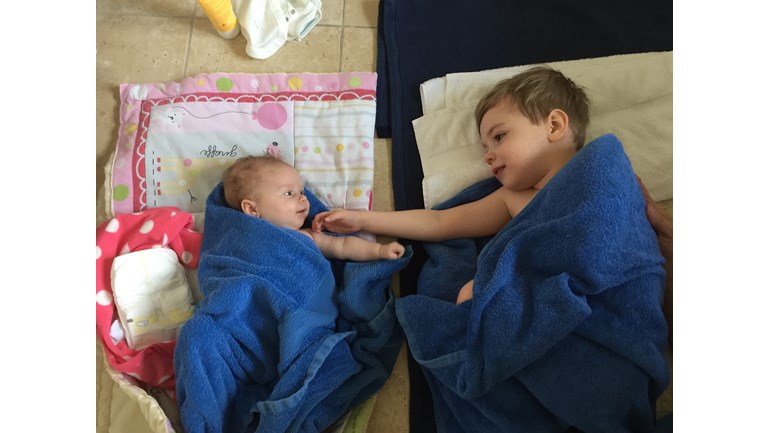 Fundraising for The Dorset Children's Foundation

We raise money for sick & disabled children to improve the quality of their lives.

When William was born he was blue. After rescue breaths from the medical team he was breathing but oxygen levels in his blood were critically low. It was discovered that the main arteries of his heart were the wrong way round; meaning well oxygenated blood was going from his heart to his lungs but then straight back to his heart, deoxygenated blood was being pumped around the rest of his body and causing his other organs to fail.He was a very poorly baby indeed and was rushed to the Paediatric Intensive Care Unit at Southampton.

We were told the operation was simple and things would return to normal for William and for us but this was sadly not the case. At a year old, William’s development was still dramatically delayed. He could not sit unsupported, could not roll over and was unable to use the right side ofhis body. More tests, more professionals and then the bombshell that he had suffered significant brain damage that affected the whole brain. It is thought that debris from cardiac surgery had travelled to the brain
and caused this widespread damage, leaving William with a diagnosis of
Global Developmental Delay - meaning all areas of his development were effected and progress would be slow and limited.
Every seizure poses a risk of further brain damage and due to his
epilepsy being difficult to control he has lost many of the skills he
worked so hard to master. Throughout all of this, William amazes
everyone around him by the way he continues to try to be active and
involved; the way he manages to find a smile even after the most
difficult nights; and by the way he can wrap his arms around our neck
and deliver the most amazing cuddle and make the day seem brighter.
We are raising money for a block of physiotherapy and hydrotherapy, along with a pair of supportive splints, called DAFOs, to help his feet and
ankles develop a good position for walking and moving.
The therapies will help him achieve the best range of movements and the most strength and coordination he can, which will put him in a better place for regaining skills that are lost during the bad periods where seizures get worse and more frequent and he regresses. This will ensure he is able to continue to be as independent as he can - continuing to crawl with speed and determination, using his supportive walking frame, pulling himself up to stand with support and reach for his favourite toys, use his trunk and arms to be able to feed himself, press switches to activate sensory lights and join in with play and games with as much
enjoyment as he does now. This will help him enjoy his life as much as
he can and for longer.

From The DCF.org If you raised cash, say from an event or wish to donate directly to William, please phone Scott Akam on 078333-318285 to discuss the advantages or disadvantages and I can advise you.

TEXT TDCF16 £1/£5/£10 to 70070 The Dorset Children's Foundation was set up with the sole purpose of helping improve the lives of sick and disabled children. All our overheads are covered by our charity shops and online sales. Every penny you donate via JustGiving goes directly to your chosen cause.

Charity Registration No. 1150538
Find out more about charity fundraising