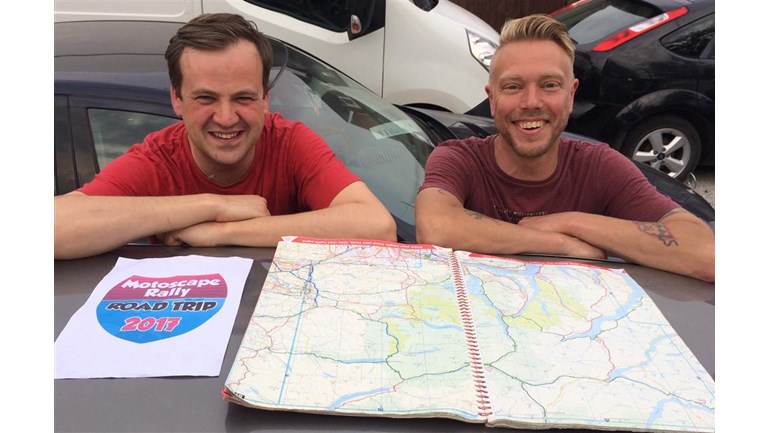 Fundraising for The Children's Air Ambulance

Thanks for checking out our page - below is our story on the adventure we are set to embark on in September - journeying across Europe in an old 'banger' to raise funds for the Children's Air Ambulance.
We'll be posting updates as we go along - preparing to traverse eight European countries in a £495 Saab - bought from a garage where it had been sat for months with a flat tyre, mysterious noises from beneath the bonnet we have yet to investigate and no MOT.

A DARING duo are putting their faith in a £500 'banger' to help them complete a charity rally across eight European countries.
Eliot Broomfield and Andrew Wakefield  will attempt the  Motoscape Rally this September  to drum-up donations for the Children's Air Ambulance.

If the journey goes to plan the 'Lamborgoonies' will return in their budget motor to the UK - extending the trip to more than 2,300 miles.
Their chariot for the adventure - an old Saab estate car - will also be their hotel for the evening as they rough it to help increase their tally.
From the start line in Saint Omer, France their route will take in highlights such as the Stelvio Pass - which, with its 60 hairpin bends to negotiate, was voted the best driving road in the world by Top Gear in 2008 - to the chequered flag in Venice.
Resplendent in various bizarre fancy dress costumes and behind the wheel of a 'ratted' motor car the pair are hoping to complete various Motoscape and driving challenges along the way and generate hundreds for their chosen charity in the process.
Andrew, 37,  said: "We were looking for some kind of adventure to tackle and with Eliot's experience as an mechanic and my 'can do' attitude I'm sure we have everything we need to help us across the finish line.
"With hindsight we could have given ourselves more time to plan for the trip - we have just over two months to gather supplies and ensure our transport is up to scratch - however it does somewhat add to the chaos and adventure."
Among the other highlights of the trip - once the pair have managed to get their banger across the Channel to the starting line - are an opportunity to drive around the famous Nürburgring, which has hosted the German and European Formula 1 Grand Prix races.
Eliot, 44, said: "As a self-confessed petrol-head the Nurburgring is a must for me. I'm just hoping that I don't have to do too much work under the bonnet as I am fully aware of the capabilities of my team mate. The journey itself will be fantastic - an adventure of a lifetime."
The pair are hoping people will sponsor them to complete their challenge - which is being tackled to raise funds for the Children's Air Ambulance. The  national service is the first and only dedicated helicopter transfer service for critically ill children – a flying intensive care unit.

We fly critically ill children across the UK to the specialist care they need. We know that the longer a sick child is out of hospital, the greater the risk. Our helicopter not only flies four times faster than by road, but also serves as a flying intensive care unit for children.