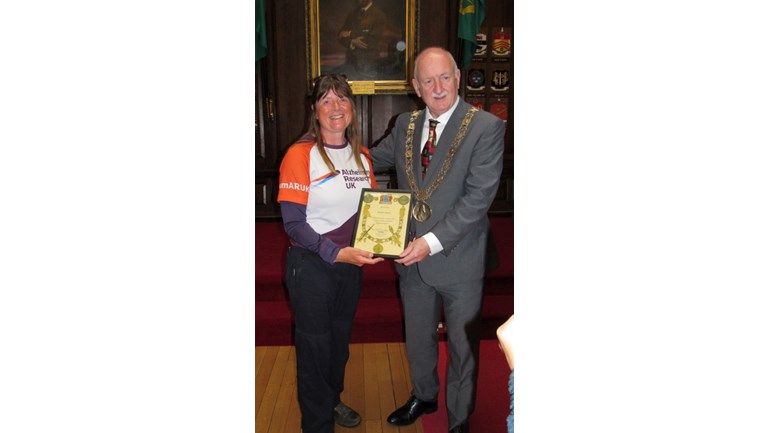 The Penny Rolls on Walking the Coast of Britain & Ireland

Fresh from my recent walk from John O’Groats to Land’s End raising money in support of  the  Alzheimer’s Charity , I am now ready to embark upon the adventure of a lifetime; a continuous walk circumnavigating the 19,000 miles of the British and Irish Coastline, and 20 of the largest islands. A feat never achieved by a woman, least of all by one on the wrong side of 50!

On January 14th 2019 I set out from Southgate in the Gower to walk the Welsh coastline heading to Fishguard  and then crossing to Rosslare, Ireland. I intend to walk in a clockwise direction around Ireland finishing my Irish leg of the journey in the autumn of 2019.

From Rosslare, I will take a ferry back to Fishguard and then head North along the Welsh coastline and thereafter clockwise around mainland UK. En route I will walk at least 20 of the largest islands. My journey will take about 3 and a half years

I am married with one son and live in the Gower having retired after working for 3 decades in the legal profession. I  work as a volunteer for many local causes: The National Trust, working as a volunteer ranger to help safeguard the Gower Peninsula, I am a trustee of a local charity which has helped to raise nearly £40,000 to save our local library, and as a school governor at our local primary school who will be engaging in a project to follow my four year trip.

In my spare time I am a keen parkrun runner, member of Lliswerry Runners, Newport, and regularly help with productions for The Bishopston Amateur Dramatic Society.

Many people have pre-conceptions about dementia, and often, it is only when someone is personally affected that they begin to find out about it.

Dementia has had a profound impact upon our family. During the last 10 years we have lost two very dear family members. Alma who succumbed to the effects of vascular dementia in a matter of months, and Kingsley, who  deteriorated to such an extent both mentally and physically that ultimately he couldn't even recognise family members.​

I  have previously raised over £6000 for Alzheimers by running a marathon and walking the length of Britain. I am now devoting the next 4 years of my life, leaving family and friends and my  cat Bilbo behind me , to raise a target of £100,000 for Alzheimer’s Research UK

In 2017, Alzheimer’s and other dementias became the leading cause of death in the UK. With no treatments to stop or cure them, these are diseases that no-one has yet survived. Alzheimer’s Research UK is committed to changing that and, with their supporters, they are here to make breakthroughs possible.

1. Dementia is caused by physical diseases, most commonly Alzheimer’s.

2. Today there are no treatments to stop or cure the diseases that cause dementia meaning no-one has yet survived.

3. Through medical research, diseases like cancer and HIV/AIDS can now be treated and we can make the same progress for people with dementia.

4. Alzheimer’s Research UK is funding ground breaking research into life-changing preventions, treatments and one day, a cure for the diseases that cause dementia.

5. ARUK have announced an ambition to commit a further  £250m to dementia research by 2025.

Thanks so much for supporting

Charity Registration No. 1077089
Find out more about charity fundraising