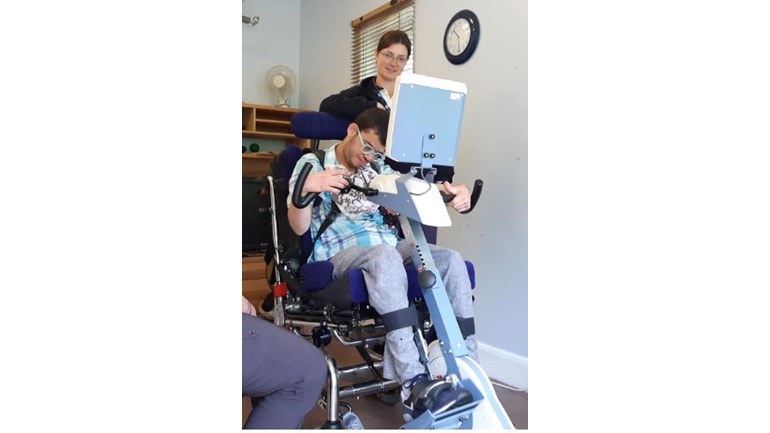 All we want for Christmas is a Thera Bike! for Certitude because people we support need to exercise and stay active

We provide person centred support to people in London

As you will know, Certitude is a London-based charity that
supports 1,500 people with learning disabilities, autism and mental
health support needs. We believe everyone should have the chance to exercise, irrespective of their disability. You can help us reach our  goal of raising £6,000 so we can purchase a life-changing bike that will allow people to lead active and enriched lifestyles.

The Thera Bike is an assistive bike for people with disabilities which
allows them to exercise from a chair or wheelchair with motorised
assistance, regardless of their ability or limited movement. In the
summer we were fortunate enough to borrow a bike for six weeks
so we could see first hand the positive impact it had physically and
emotionally for people we support.

This is Frankie. Frankie is non-verbal and has cerebral palsy. He also has limited movement. Frankie has not had many opportunities
to be physically active in the last 23 years but the Thera Bike allowed him to engage in exercise that was not only accessible for his disability but also truly meaningful, helping boost his level of physical activity and for him to partake in mentally stimulating games.

The health benefits reported by Thera Bike users are both physical
and mental and include increased circulation, sustained muscle
power, boost in self-confidence and mental stimulation, increased
bladder and bowel movement which would prevent illnesses like
severe constipation, osteoporosis and arthritis.

We know that only 16.8% of people with a learning disability play
sport at least once a week, compared with 39.9% of the general
population (Sport England, 2018) and that 64% of UK sports clubs
lack appropriate equipment for people with a disability (Mencap,
2019). Having this equipment will allow some people supported
by Certitude to access exercise opportunities for the first time and
experience the benefits of exercise in a fun and safe way.

The bike itself brand new costs £6,000. It is expensive, but the higher spec model (Tigo 502) allows people to play games depending on the length and speed at which they’re cycling, and also interact with each other. For example, in the football game they can score a goal, which makes exercising more fun and rewarding.

Without your generosity, we simply won’t be able to hit our target.
People are still excited from using the bike in the summer and are
keen to continue reaping the benefits. Wouldn’t it be incredible if
we could deliver a Thera Bike on Christmas morning to the people
we support? We would promise to keep you updated on whether
we hit our target and post you an update from the people using
the bike.

We thank you in advance. Thank you for reading this appeal, your
generosity and interest in Certitude thus far. We wish you an incredible Christmas and New Year.

We provide support across London to people with learning disabilities, autism and mental health support needs as well as their families. We support over 1,500 people in 16 London boroughs.