The Sides of March
Fundraising for CALM (Campaign Against Living Miserably) 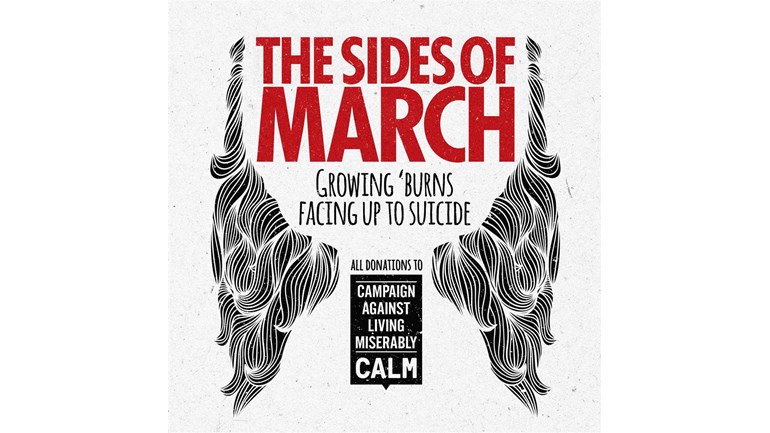 The Sides of March

The Sides of March

growing sideburns in the month of March for CALM (Campaign Against Living Miserably) because we are raising awareness for suicide prevention.

The Sides of March is a foundation set up to raise awareness for the UK’s biggest killer of men under the age of 45. Suicide.

The concept is simple, fun and above all it’s for a great cause.

DURING THE MONTH OF MARCH GROW SOME SIDEBURNS!
Growing ‘burns. Facing up to suicide.

To join in simply register by clicking "donate" on this page from just £2 and then add your name to your donation message - for example: "Elvis - signing up for the Sides of March".

Then start growing your sideburns at any time during the month of March and get yourself sponsored. Direct all your sponsors here and have them donate in your name for example "donation on behalf of Elvis". Or collect cash sponsors and pay it in via this page under your name at the end of March.

You can also join in by simply sponsoring us.

For more information and to join the Marching Army:

All funds raised from you and your sponsors via our just giving page go directly to the CALM charity on behalf of you and The Sides of March. All proceeds go directly to CALM and all costs are donated by our team volunteers.

If you have lost someone to suicide, been close to people who have or simply just want to help, then join the Marching Army, face up to suicide and help give suicidal people another option.

Our friend, a brother, a son and an uncle Jeshan Ahmed tragically left us January 2016. He committed suicide. We may never know exactly why or what happened to our dear friend but he fell victim to himself and decided to end his own life.

He will be dearly missed.

This is a tragedy that sadly happens to people every single day at an alarming rate. On average over 12 men a day commit suicide in the UK alone and according to the World Health Organization, every 40 seconds, a person commits suicide somewhere in the world.

We are here now to join together and to raise awareness to help people in similar situations to where our friend Jesh found himself at the end and for those of us left behind.

Simply register by donating as little as £2 via our JustGiving page. Start growing your sideburns of choice at any time in March and get yourself sponsored!

Direct all your sponsors to our JustGiving page and have them donate on your behalf by adding your name to the “leave a message” box via The Sides of March - all proceeds go directly to CALM. You can also join in by simply sponsoring us without growing sideburns yourself...

On Friday April 1st we will be hosting a charity gala night to celebrate the Sides of March 2016. Details on our web and social media pages.

The Story behind the name...

The Ides of March is a Roman term now famous for the time when Julius Caesar, died. It’s also a term marking the first full moon of the old Latin calendar year, during the modern day month of March.

Despite the common misconception that most suicides occur during the winter months research and statistics show that this tragedy occurs mostly in the spring months from March to May.

We chose the name The Sides of March as both a play on words and the pertinent timing of the year.

We want to use this time to grow some sideburns, have some fun with it and ultimately raise some awareness for a great cause, helping prevent suicides, raising awareness and giving support.

When Caesar died it was a pivotal moment in human history, which changed the world at the time. We have recently fallen victim to our own world changing tragedy and know we are not alone in our loss. By creating this foundation we want to hopefully help change the world again, even if it is just for a few people.

Beware the Ides of March Caesar was warned. He didn't listen.

Wear your Sides in March we ask. We hope you listen.