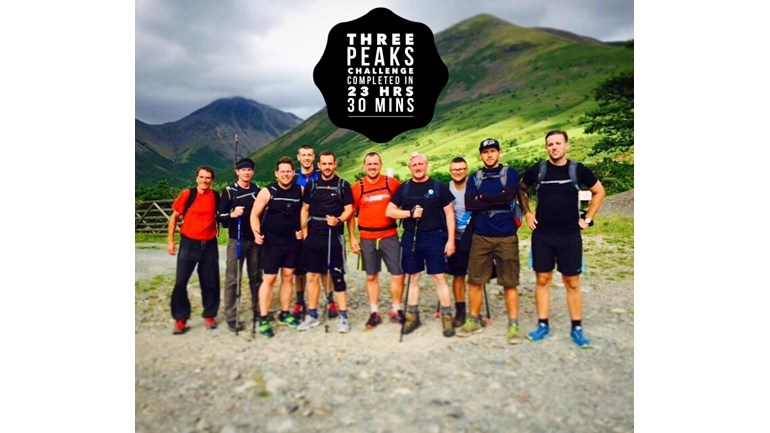 Mountain Climbing, Marathon Running & Car Washing for UCL because scientists there are working hard to find a cure.

UCL is a leading teaching and research university consistently ranked in the UK top-5 and the world top-10. Located in London its excellence extends across the disciplines, from biomedicine to fine art and impacts people across the globe.

This year, 2016 we will be raising funds & awareness for The UCL Amyloidosis Research Fund.

Why are we doing this?
We're raising funds for this charity as its close to our hearts. Lesley Toft, mum of Darren Toft (one of our team members here at The Window Co) received her diagnosis of AL Amyloidosis in 2012 & has fought this dreadful disease head on with such strength, courage & determination & has inspired us all to take on these challenges.
As well as having to cope with this dreadful disease Lesley had to also deal with the sudden loss of her beloved husband John Toft, (Darren's Dad & our close friend here at The Window Co) who passed away in April 2013. John was Lesley's rock so you can imagine the strength it took for her to carry on fighting without him & she did for her two boys.

So we feel that running marathons, climbing the three peaks, doing car washes & putting on a concert is a piece of cake & the least we can do to help Lesley & other sufferers of Amyloidosis.
We're also doing this in memory of John, who was a serial helper & giver & he would have been massively involved with this.

Take a look at the pictures & Links below to read more about Lesley's story & click this link to find out more about John & how much he liked to help people. http://the-windowco.co.uk/blog/john-toft-salt-of-the-earth/

What is Amyloidosis?
Amyloidosis is caused by an abnormal protein in the bone marrow. This makes sticky fibrils called amyloid clump together and form hard insoluble deposits which settle in tissues and organs interfering severely with their function and structure. Amyloid can deposit anywhere in the body except the brain. The most common places are the heart, kidneys, liver, spleen, and airways such as the mouth, throat, nose and lungs. Sufferers can become chronically ill and do not survive without life saving treatment. The symptoms are often vague and associated with many common diseases so Doctors do not often think about amyloidosis. It is relatively rare and can sometimes take many years to diagnose. There are about 3,000 sufferers in the UK known to The UCL National Amyloidosis Centre (NAC) in London, the only specialist centre in the UK. Its outstanding clinical work and research have made it one the the three centres of world excellence for the disease.

Current treatment is various forms of very tough chemotherapy but this can only slow progression of the disease as there is no cure. New, better and less toxic treatments are on the horizon and currently doing well in clinical trials. These cost many millions of pounds. The NAC in collaboration with the leading drug company Glaxo-Smith-Kline is very optimistic about a new drug which can destroy amyloid deposits and clear them from organs. It has been invented by a leading Professor at the NAC. If proven effective it will significantly improve the quality of life for sufferers.

The money raised by your support of our challenges will help accelerate the research at the UCL National Amyloidosis Centre towards discovering a much needed cure.

What events will we be doing?
Car Wash in February & AugustManchester Marathon in AprilConcert in JulyThree Peaks Challenge in August

UCL is a leading teaching and research university consistently ranked in the UK top-5 and the world top-10. Located in London its excellence extends across the disciplines, from biomedicine to fine art and impacts people across the globe.