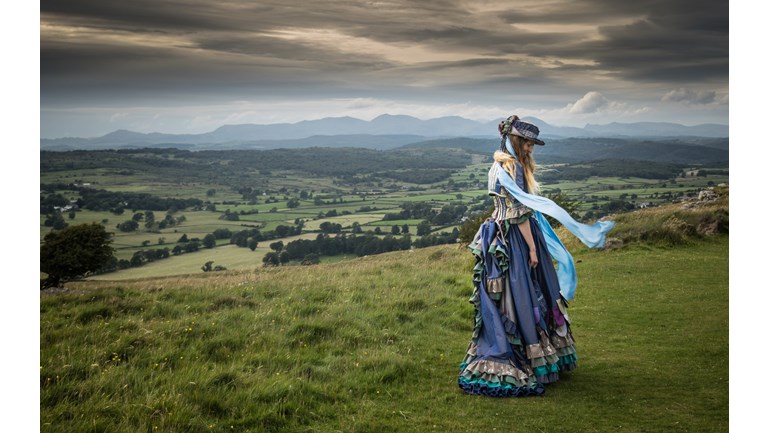 Fundraising for UK for UNHCR

The idea of the ‘Thousand Mile Dress’ was a challenge to myself to walk a thousand miles in a dress. Not in one go I must add, but accumulatively over perhaps a year. The original reason for this was to examine and measure what happens to long trailing clothes that are well traveled. This idea developed whilst working on the costume for a Victorian play. I became interested in the ageing of clothes- how many miles to cause real damage, as opposed to the artificial aging of our theatrical garments.

I enjoy seeing the unexpected, and this too plays a part in my work, when photographing my costumes out in the world, as opposed to in a studio. People don’t expect to see a fully costumed person wandering around, but usually it is met with interest, or a slightly embarrassed ‘I’ll pretend not to have noticed’ smile. Rarely is there any hostility or disapproval. The unexpected provides something different to talk about instead of recounting a day filled with ‘just the usual’.

Setting my work outdoors is important to me for another reason. Nature is my inspiration so often, from colours, shapes and textures- that it would be wrong to photograph it inside in a sterile studio. It has been commented that it’s a shame to damage a carefully crafted item with rain and mud. I do agree that it can be sad to loose that freshness of recent completion, but I think it would be worse for a pristine garment to be locked away in a wardrobe until the seams rot and it falls apart anyway from old unused age.

This made me think a bit about my own wardrobe. How many of its contents do I actually wear? I have some things that I wear until they fall apart, and others that are completely surplus to requirements- but I like them. I’m certainly in a very privileged position to own a varied and largely impractical wardrobe. Many of these garments did not cost a lot, and in my immediate circles this may not be perceived as wealth- but when compared with people of other countries (even sometimes our own), or other periods of time, it can begin to look like an extremely decadent collection.

Sometimes in our wardrobes are things we’d like to wear, but aren’t brave enough to. On one level, the ‘Thousand Mile Dress’ is taking a stand against this suppression of expression, and getting something out of the secret wardrobe of pointless possession, and wearing it; not waiting for it to rot.

But the journeying of the Thousand Mile Dress has put me in mind of other journeys- ones made by people who only have one set of clothes, and carry all their possessions on their person. Refugees. They are crossing thousands of miles, and not for pleasure, or art, but for safety. It feels wrong to talk about journeys at the moment without acknowledging how fortunate I am to freely choose where I travel.

I recently travelled across the world to New Zealand, and how strange to think that with my British passport I can conveniently hop from country to country- flying right over these scenes of devastation, all in the search of adventure and fun. I was free to complain about the suffering of my long flights, with no sleep, and little opportunity to stretch my legs. But we had food, and movies, and a whole seat each (even if they were smaller than business class), access to water and toilets. Even so, I admit- it was uncomfortable, it was boring. How much worse, then, for people who flee from home, possibly to never return, and for whom merely to survive their journey to unwelcoming borders becomes a success in the shadow of multiple ways they could have perished along the way.

And so my Thousand Mile Dress is evolving. I don’t intend to abandon my original concept of ageing the dress through miles of travel. I still believe in the importance of art and adventure. But now it is becoming about more than just its own journey.

One of the most frequently asked questions about the dress is ‘what are the scales for?’ I suppose initially they came about because I enjoy making them- they are a bit of a trademark that feature on most of my creations. I like using up leftover materials that are too small to be useful elsewhere. I thought about using them as a counter for the number of miles I had walked in the dress, but now I’ve had a better idea. For every pound donated to my appeal, I’ll add a new one to the dress. For no particular reason, I first added 136 scales to the dress, and have given the funding a kick start by donating a pound for each of these- but now the rest is up to you! Just one piece each can effect a massive transformation if lots of people get on board.

I’m sure I’m not the only person who has looked in horror on these news broadcasts again and again, and until now done nothing about it. I’m an artist, not a politician, and I don’t know what the long term solution is- but this has been my excuse not to act for too long. I see people in need for basic essentials- food, shelter and protection. I want to show support for them in the way I hope someone would for me if the tables were turned, and so I’m asking you to consider joining me, and making a small gesture for those who are in need today.

Sponsor a scale! (Did I mention I like a challenge?)