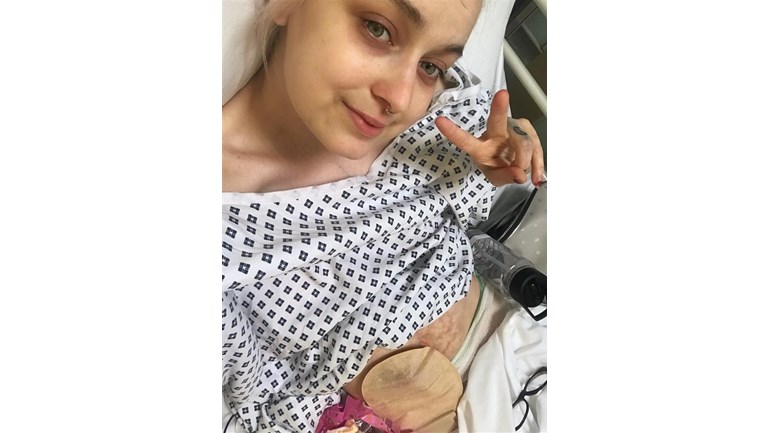 JOIN US as we WALK IT together; standing strong and raising vital funds for the fight against Crohn's Disease, Ulcerative Colitis and other forms of Inflammatory Bowel Disease.

Thanks for taking the time to visit my JustGiving page, this is a long story so a TL;DR: I got Crohn’s, my gp was crap, I had surgery, friends & family are amazing, it’s a constant battle.

This is a story all about how, my life got flipped, turned upside down, and I’d like to take a minute Just sit right here, I’ll tell you all about how I got a stoma called Merlin...

I have had symptoms for three years ( almost to the day at the point of writing this ) but ignored for months. I was losing weight rapidly, unable to eat, horrible mouth ulcers and achy joints, going to the toilet 40+ times a day - being told it was anxiety & IBS after many sleepless nights (in two years I had only had one six hour consecutive sleep) & developing fistulas, a GP refusing to send me to see a specialist because there was no blood in my stool and the thought of having a blood test set off extreme panic attacks - though I’m now a pro at them.

I almost gave up but I got my referral to gastro eventually & Dr S was amazing.. and patient, we tried some things... but they didn’t work. After a year I got an official Crohn’s disease diagnosis & referred to St Marks in Harrow. In April 2018 I met my consultant and surgeon I was told I’d be having ileostomy surgery - I cried out of relief and happiness.

I had decided Long before surgery was ever mentioned by the doctors that my stoma would be called Merlin because of my fistulas (which I had called Nemo and Dory because my sister was grossed out by the word fistula) and it has the word fish in it so I said if I ever had a stoma he would be called Merlin. (Though I did toy with the idea of magical Trevor because he is very clever haha but Merlin has kind of magically change my life I guess so it’s fitting.)

They wanted to do the surgery as an urgent case however my best friends were getting married four weeks later and there was no chance I was going to miss that so I pleaded for another date and they advised I would have to wait until the space came up and it could be a while. I had my ileostomy surgery on the 14th of June 2018. I instantly felt better & I’ve just been getting stronger since. I am fortunate in that I can now eat what I want except sweetcorn and I could not go to the gym and I can play with my niece and nephew and go out with friends and just enjoy life,  which lowest points I genuinely didn’t think would ever happen again.

I have grown so much as a person & I’ve made life long friends with others who sadly also have to go through these diseases or have stomas for other reasons. I have never known more resilient honest & shining people  than those of me because of this process weird and wonderful illness, and it’s safe to say without them I wouldn’t still be here .

I am currently on infliximab (which is a type of chemotherapy drug) and sometimes pain meds when it does flareup a little but touchwood that isn’t too often.

JOIN US as we WALK IT together; standing strong and raising vital funds for the fight against Crohn's Disease, Ulcerative Colitis and other forms of Inflammatory Bowel Disease.