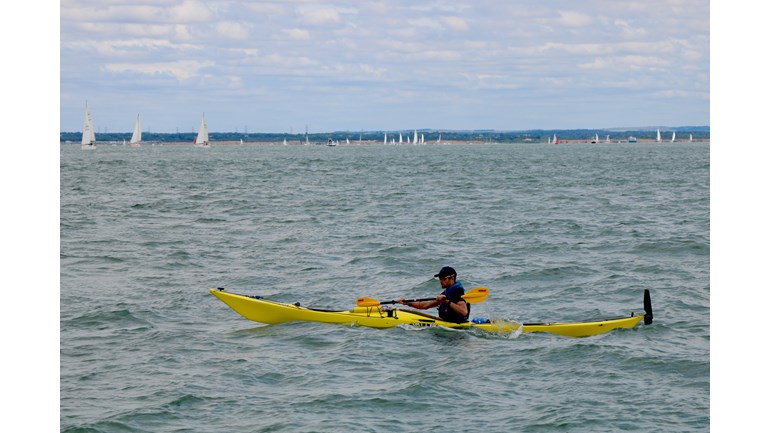 Tim's Non-Stop Round The Isle of Wight Kayak

Last November I rekindled a past passion of mine—sea kayaking. I purchased a 17.5 foot expedition level sea kayak and began paddling; reacquainting  myself with the freedom of skimming along the surface of the water, using just your own willpower and strength for propulsion.

There was one objective, one thought, which lay in the back of my mind from the moment the first paddle stroke cut through the water… how far can I go? Much as my bike expeditions have previously taken me over many new horizons, I wanted to see where this new horizon would lead.

I set myself an objective… to paddle non-stop around the Isle of Wight during the summer of 2019. I have cycled and sailed round the Island more times than I can count, but the 95 kilometre route by kayak would be a whole new challenge, and the first of many new all-day horizon explorations.

I began training in the depths of winter; layered up like an onion, using a rag-tag bunch of cycling kit and sailing kit to try and provide protection from the elements.

The paddles were a challenge. A reminder that cycling uses little of your upper body, and however strong your lungs and legs may be, your arms can be as weak as a kitten.

After many long paddles; many days when I lost the feeling in my toes and hands, and many close calls with the winter storms and strong tides; I finally began to feel at home in the boat. It was as if I was finding my feet again on familiar ground, but territory last visited when I was a fourteen year old Sea Scout.

This realisation of the feeling of reacquaintance—of re-establishing long lost connections in the brain and body, made me view my paddles like rehabilitation of sorts; a chance to re-train and rejuvenate a thought lost part of my past life. That notion got me thinking of the Isle of Wight based charity The Ellen MacArthur Children's Cancer Trust.

The EMC Trust is a foundation that takes young cancer survivors out onto the water, to embrace the freedom and escape offered by a day of sailing. Based in East Cowes, I have often seen their magnificent work with groups of youngsters heading out on the sky blue yacht from the marina; sometimes with nervous expressions on the outbound departure, but always with smiling faces when they return.

We often consider how cancer takes lives and unfairly takes loved ones from us. What perhaps we do not consider so much is the phycological effect the disease has on those that manage to survive it; especially on a child's mind. Imagine looking death in the face; fighting the hardest and most painful battle you could ever imagine; then having to return to school as if everything was normal again—these children are like soldiers; they need help reacquainting themselves with the life they lived before.

I decided that if I was going to paddle for twelve to fifteen hours non-stop around the Island, I wanted to do it to raise awareness of how the water can calm and rejuvenate the mind. The Ellen MacArthur Cancer Trust was the perfect partner to support, and so a plan was set to make the Round the Island Kayak a fundraiser for the superb work of the EMC Trust team.

For many young people simply picking up where they left off before their diagnosis isn’t possible. The Ellen MacArthur Cancer Trust is a national charity that supports young people aged 8-24 to rebuild their confidence after cancer through sailing and outdoor adventure trips.

Charity Registration No. 1096491
Find out more about charity fundraising