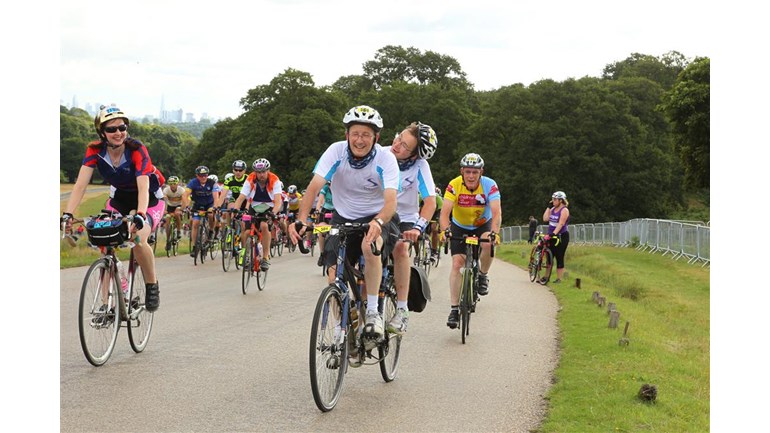 We are joining the Tandem Cycle Challenge for Retina UK because to support this fantastic charity.

Join in and fundraise for Team Retina UK and help us aspire to a world where everyone with inherited sight loss is able to live a fulfilling life.

In July 2007 when Tom was 15 he was hit  by two cars whilst crossing a road in Chelmsford sustaining a serious head injury which left him in a coma for two months.  As a result of the accident Tom is unable to speak, has dystonic/spastic posturing in all four limbs.  He can walk but affected by dystonia and blepharospasm (sustained, forced, involuntary closing of the eyelids).  Despite this in 2015 Tom learnt to ski again – something he had done with school before his accident and really enjoys.  This was made possible by a Charity Disability Snowsport UK (DSUK) whose instructor James Sterry at Hemel Hempstead indoor ski slope taught Tom to ski again.

For Christmas 2016 Tom was bought a tandem to see if this would enable him to ride a bike.  It was an instant success, with Tom providing the power (the stoker) with Mike, his dad, acting as pilot.  DSUK advertised for cyclists to enter the Ride London Surrey 100 in 2017 and wanting to give something back Tom signed-up, despite having only being riding the tandem for a few months.  After much training, we completed the 2016 Ride London in 7hours and 44minutes  - a truly amazing day and fantastic achievement by Tom and his 54 year old dad.  Since then Tom has completed charity tandem rides for Essex Air Ambulance and Fairliegh Hospice in 2018.
A colleague of Mike in Royal Mail saw the Tandem Cycle Challenge being promoted on the Royal Mail Intranet.  Not having seen a tandem charity ride before we immediately signed-up.  We are looking forward to the challenge and meeting other tandem pilots and stokers.

Join in and fundraise for Team Retina UK and help us aspire to a world where everyone with inherited sight loss is able to live a fulfilling life.

Charity Registration No. 1153851
Find out more about charity fundraising