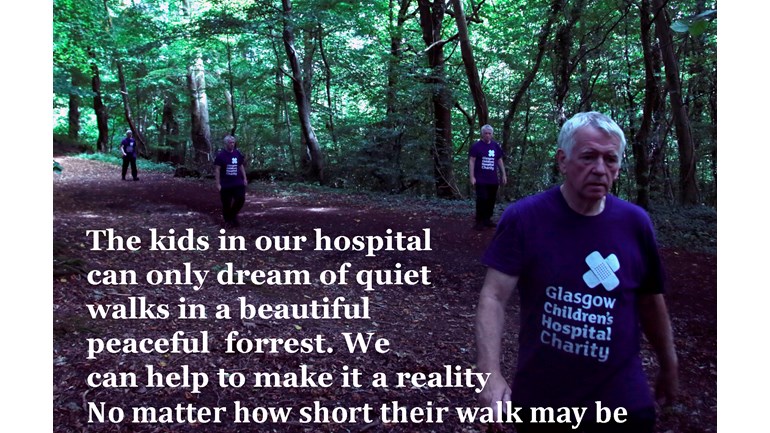 Thanks for taking the time to visit my JustGiving page. Please take time to look at the photos too. My name is Tony Gilmour. I am 62 years old and I want to walk the West Highland Ben Neverest Way. What's that? I hear you say. Its really just the West Highland Way WITH a serious twist. I want to climb some of the famous munro mountains that abound in the Scottish highlands. In fact my initial goal is to climb enough munros on the way  to climb the SAME HEIGHT AS MOUNT EVEREST that means at least 6 munros because the West Highland Way itself involves climbing more than 10000ft over the 96 miles.

Well. Its done. Its finally over. I've walked climbed and scrambled

On the second day of the challenge I was very nearly killed when  I fell, but not on a mountain it was on the narrow road to Rowardennan with a very narrow pavement. I tripped on a drain cover and fell onto the road. just as two cars were passing. I don't know how I wasn't even touched by them but I can assure you it was EXTREMELY CLOSE.

On my first munro climb, Ben Vorlich, I GOT LOST, because I didn't pack my map. I "still" have a clear vision in my head of me packing that map, and on the day when my wife Marie asked if I had packed my compass drinks and MAP I was 100% certain I had. I reckon I must have dreamt one of those "real dreams" about packing my map. Anyway after 5 hours of traipsing up and down some wrong paths I decided to give up and go home. My next munro was Ben Lomond and I didn't need a map or good weather because I'd done it 5 times already and it has a clear path all the way plus at this time of year there are always lots of people on it.

I decided to  reschedule the challenge when the second and third part of the West Highland Way turned out to be much more than just " a walk" and a lot tougher than we expected.  Especially Rowardennan to Inverarnan which had a lot of narrow, steep ups and downs on the  rocky slopes of the eastern banks of Loch Lomond. I included a couple more rest days because I still didn't know if I was fit enough to do the whole thing.

After the next munro I starting to wonder what I had got myself into. It was Ben More. It started off reasonably well with a winding climb up to a fence which marked the start of my first choice of route on my map.  But when I got there, there was no sign of the path marked on the map. On looking at the terrain where the path should have been there was absolutely no sign of their ever being a path there. It looked to me as if it would be very difficult climb and I assumed that the path had been abandoned for the easier route on my map. I followed this and it started off easy and then became very challenging due to bad weather and very steep climbing mainly muddy with occasionally slippery and loose rocks. After 4 hours and seeing only two small groups of people on the mountain I had reached about half way up but the clouds had come down and the wind was howling. There was no longer any clear path to follow and no landmarks visible to check my bearings on the map. The RAIN (not hailstones) was actually stinging my face due to the strength of the wind. So I thought it would be sensible to go back down. Having failed in two of my first 3 munros I needed to make up some climbing footage to reach the Mt Everest target. So I decided to climb Ben Lomond 5 times and Ben Nevis to round off the challenge. As mentioned above this meant neither the weather nor lack of maps or company would cause me to miss a munro again.

To our surprise the next couple of stages were far more civilised and walkable EXCEPT Dorothy and I got lost. YES WE GOT LOST ON THE WEST HIGHLAND WAY.  We had started off confident in the knowledge that the weather forecast said it would be mainly sunny for about 6 hours and then rain would come in.  We could easily do this section in six hours. Like two little lost sheep we followed a group whom we thought were doing the West Highland Way just like us. BUT THEY WEREN'T. 4 hours 4 miles and 1500ft climb later we were finally back to a point only 5 minutes from our starting point for the day. Meaning we had 9 miles of the scheduled walk still to do and we got well soaked into the bargain.

Colin had found a site that would allow us a free space for their campervan but not on the nights we initially needed because of a big mountain running event that was on in Glen Co at the time. So we  had to delay by one day which allowed me to squeeze in my fifth Ben Lomond climb. The site at Kinlochleven was spectacularly beautiful as was the sunset that night helping us to calm down before tackling the final stage  of the West Highland Way.

At this point I would like to thank Colin and Dorothy for their support and company throughout this challenge. Dorothy with her enthusiasm and determination helped keep me going during the deceptively named long "walks". She was always setting the pace and first to start again when we had a break. The same word ( always) applies to Colin's support role in that he was always there in the back ground ready when we needed support. We always knew he would be there after many hours of us walking and him waiting "so patiently".

The final ascent was Ben Nevis. The munro and the Scottish weather both lived up to their reputations. On the morning drive up from East Kilbride the the sun rose and was almost constant until the moment we crossed the Fort William boundary. The climb itself had a mixture of sunshine and showers. Lower down it was almost too warm when the sun shone but three quarters of the way up I had my hat gloves and waterproof on right up into the snow covered upper reaches. I met a bunch of fellow fundraisers who were also raising funds for The Glasgow Children's Hospital Charity. One of them had a son who he said would not be here if it were not for the skills and care of the hospital staff. What more incentive could anyone ask to get on and finish a very tough challenge.

I DID IT!! I can hardly believe it but I have to because I DID IT!!!. I cant begin to tell you how I feel, even now 20 DAYS AFTER I DID IT????. There were times when I doubted myself or doubted that my body could take such strains. But I only had to have a cry looking at The Glasgow Children's Hospital Charity's website ( Cant have a proper look at this website without tearing up) to remind myself why I was doing it and how lucky myself and my family are. Add to that the number of people who  helped and supported with such enthusiasm emotion and genuine care and there is NO WAY that I was going to quit short of some catastrophic accident or illness. When I see those sick kids in the hospital it reminds me that its only that little bit of good fortune that makes me one of the lucky ones. This story doesn't end there .

On Wednesday 11th October Dorothy, Colin, my wife Marie and I were invited into the hospital for a wee tour. Not of the wards that would make the children feel like they were in a zoo. But to see the ordinary every day things that The Glasgow Children's Hospital Charity funds, over and above the research, and expensive equipment like specialist 3D scanners to scan wee tiny baby's hearts. Things like the fantastic murals painted on the previously sterile white walls of the long corridors. The well equipped games room for those who are able to move around, or who just sit in front of one of the latest  games consoles,  or do the old fashioned thing and chill out by playing some music or doing some colouring in. The sanctuary where families can go for some peace and quiet or religious comfort. They have even held marriage ceremonies in here. The WHAT MATTERS TO ME board, where patients can post notices that tell staff what matters to them RIGHT HERE RIGHT NOW in their lives. The tree on the wall where families can put a copper leaf on with a message in memory of their own loved ones. The mediCINEMA which is SO LIKE walking into my local East Kilbride cinema but caters for all abilities including those who have to bring their own beds and meds with them. ALL of these relatively small things cost a cumulative amount of money but MAKE A DIFFERENCE to the children in the hospital and  none of it would be there without your donations.

While we were there  we also had the opportunity to do the traditional handing over of a                   BIG CHEQUE for £2451.75 which was the total money donated "on that day". An amazing amount which completely smashed everyone's expectations.

Please take a look at my pictures of the hospital and the challenge itself as I remind you that the JUST GIVING PAGE IS STILL ACCEPTING DONATIONS RIGHT UP UNTIL THE 31st OF OCTOBER.

GREAT NEWS  As the EAST Kilbride News has done a FANTASTIC TWO PAGE SPREAD (see photo with last update) on our story, on the 31st October, we have decided to keep accepting donations for another couple of weeks. So if you know anyone who might be interested tell them about our E.K. news article and maybe we can get a little more for our great cause.

AND I'LL FINSH WITH AN ENORMOUS THANK YOU TO ALL OF YOU WONDERFUL FAMILY  FRIENDS AND TOTAL STRANGERS WHO SUPORTED US BEFORE DURING AND EVEN NOW AFTER OUR CHALLENGE HAS FINISHED.

YOU HAVE BEEN AMAZING

SO LETS HELP SOME CHILDREN OVER THE HILL AND GIVE THEM A CHANCE TO LIVE A LIFE. ﻿

Charity Registration No. SC007856
Find out more about charity fundraising