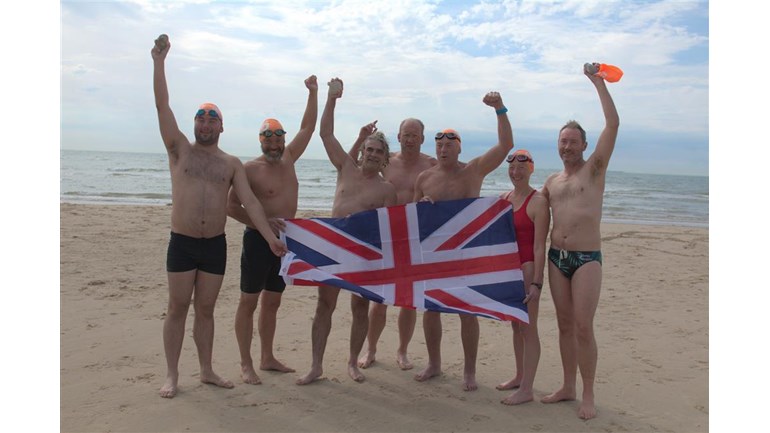 Every 3 minutes someone in the UK is diagnosed with dementia.
There are 850,000 people with dementia in the UK,  with numbers set to rise to over 1 million by 2025. This will soar to 2 million by 2051 and again UK specific, 225,000 will develop dementia this year alone.

Approaching 1 in 6 people will develop dementia - that's a 16.7% chance for any of us in the lottery of life.

It is the largest cause of death in England, Wales and Northern Ireland. Alzheimer’s Society is transforming the landscape of dementia forever. Until the day we find a cure, we will create a society where those affected by dementia are supported and accepted, able to live in their community without fear or prejudice.

A loose and unguarded comment one evening at a Tri50 swim training session at High March in Beaconsfield has led to this challenge now being a reality.

As a group we did not know each other before circumstance and the "pull" of the English Channel brought us together.

We are registered for this challenge with the Channel Swimming & Pilots Federation :- http://cspf.co.uk/.

Our swim will be officially observed and recorded.

The English Channel is a unique and demanding swim, considered by many to be the ultimate long distance swimming accolade. It isn't just the distance that is the challenge, but more, the variable conditions that you are likely to encounter. These may vary for mirror like conditions to wind force 6 and wave heights in excess of 2 metres. The water is cold and all swimmers are strongly advised to acclimatize to it. There is a very good chance of meeting a range of acquatic life including dolphins, seals, long finned pilot whales, jellyfish and even sharks. There is also the clumping hazzard of seaweed and plastic with the occasional rogue tree or plank of wood. It is the busiest shipping lane in the world with 800 tankers passing through and 200 ferries/seacats and other vessels going across daily. The latter are also permitted to dump their bilge in the Separation Zone between English and French waters.

We are the No.4 slot on a Neap tide from 10th to 16th July 2019 from Dover and are likely to start our crossing at 2.00am or 3.00am (depending upon the weather) from either Shakespeare Beach or Samphire Hoe. The plan is to reach land at Cap Gris Nez between Boulogne and Calais. The water temperature will be circa. 12.0C (way below the seasonal average of 16.0C) with colder pockets down to as low as 6.0C. As a guide, the average water temperature of an indoor swimming pool at a leisure centre is 27.0C

Nirvana Spa c/o Sean Barley, has very kindly agreed to "sponsor" our not insignificant overhead for this challenge which is in the region of £5000.00 and includes the hire of the boat, the pilot and his crew, registration and administration costs, the official CS&PF observer and essential branded kit including dryrobes.

Thank you very much Sean and Nirvana Spa :- https://nirvanaspa.co.uk/

The English Channel is 21 miles across at it's narrowest point, however, with at least two tidal shifts to contend with we are looking at a minimum of 28 miles (and possibly up to the record to date of 65 miles by Jackie Cobell) in an "S"-shaped swim. Initially we will be pulled up towards the Netherlands and then as the tide turns we will be flung back down again toward Jersey and Guernsey.

The wind and weather can also be challenging as weather conditions over the Channel can change very quicky and often don't match the forecasts.

We will each swim for one hour and repeat in order until we reach France.........being on the boat for 5 hours between swims at a swimmer's pace and remaining in one piece may be more of a challenge than the actual swim! Thanks goodness for Stugeron!

We will follow English Channel swimming rules and wear only one textile swim suit (not extending below the knee), one latex swim hat and one pair of swimming goggles................there will be no neoprene in sight! We must not touch the boat nor one another during each one hour stint and once we start we must follow the same order sequence of swimmer rotation. Not to do so - in part or in whole - will mean instant disqualification.

The average age of a channel relay swimmer is 34 years and for us this is 45 years.......and only that low because young Henry Bell at 19 years of age has pulled our average way down........most of us are north of 50 years of age and should really know better!

Approximately, 7694 swimmers have taken part in 1024 relay swims.
The average time for an English Channel relay swim crossing is 12 hours and 45 minutes and 11 seconds - with weather and currents no one knows what to expect except cold, jellyfish, floating detritus, sea sickness (both in and out of the water) and ten minutes in France without the need for a passport before possibly getting arrested!

The first relays of the Season over the last week or so are taking between 14 hours and 17 hours due to the cold and large fluthers, smacks or blooms of jellyfish. The fastest relay crossing is 6 hours 52 minutes by the US National Men's Swim Team in 1990.

This is a YouTube link to our 2 hour qualifying swim at Durley Chine on Saturday 26th May in water temperature of only 13.0C :-

To track our swim (on-board Gallivant and only after we start) and learn more about English Channel swimming, please see below link :-

Our nominated charity is Alzheimer's Society as Team Captain Stephen Gould's father has this awful debilitating disease. He was a GP and a big name in swimming during his career which culminated in coaching and  managing the Northern Ireland Commonwealth Games Swim Team. Team Tri50 has kindly agreed to support Stephen's ongoing individual efforts in fundraising for this wonderful charity.

This is a true team challenge based on the aggregate of exceptional solo effort and incredible new and undoubtedly lasting friendships.