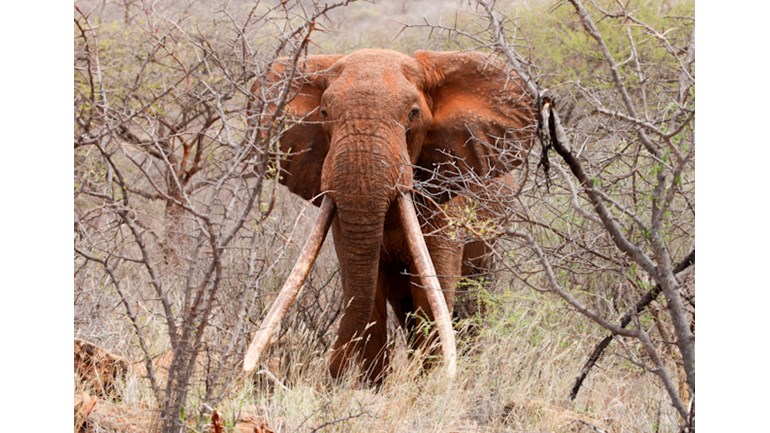 Tsavo Trust: Extra Protection For The Last Giants Of The Elephant World

TUSKS RIGHT DOWN TO THE GROUND...

Have you ever seen an elephant with tusks that reach all the way down to the ground? These huge elephants, a few of which still exist in remote reaches of Africa, are in peril. They need our help.

YOUR DONATION HERE CAN HELP LOOK AFTER SOME OF THE WORLD’S LAST GREAT TUSKERS.

Historically, elephants carrying tusks weighing in excess of 100lbs (45kg) per side were known as ‘hundred pounders’ and were much sought after by hunters and poachers alike. Today, at least 8 of these giants remain in Kenya’s greater Tsavo Conservation Area, and it is their protection from ivory poachers (alongside the protection of other impressive bulls that will become Tsavo’s ‘hundred pounders’ of the future), which provide the rationale for the Tsavo Trust’s ‘Big Tusker Project'.

THE RUST-RED ELEPHANTS OF TSAVO...

At over twice the size of Israel, the greater Tsavo Conservation Area is a vast, wild area of awe-inspiring natural beauty and incredible biodiversity. The area boasts Kenya’s single largest population of elephants – famously red in colour due to Tsavo’s rusty earth tones – numbering 12,000 animals at the last census (February 2011). This might sound a lot – but not when you consider that in the late 1960s there used to be 35,000 elephants in Tsavo. Among the surviving population is arguably the world’s last viable gene pool of elephants carrying exceptionally large ivory.

Over the last 18 months, the poaching of elephants for their ivory has increased alarmingly across the African continent. A recent atrocity accounted for 11 elephants, gunned down in cold blood along Tsavo’s Tiva River in January this year. The incident made headlines and appalled people around the world. One thing is certain: if Tsavo’s ‘hundred pounder’ elephants are not secured today, they and their gene pool will soon be gone forever.

TSAVO TRUST'S 'Big Tusker Project' Working in close collaboration with the Kenya Wildlife Service (KWS) and alongside research and conservation partners including Save The Elephants, the Tsavo Trust monitors the elephant populations of Tsavo, with a specific emphasis on the large ‘tuskers’. Richard Moller, Tsavo Trust’s Chief Executive Officer, was originally carrying out this monitoring, with the indispensable help of our light aircraft, 5Y ACE, which has spent a long lifetime flying for conservation over Tsavo and other Kenyan National Parks. Today, thanks to so much support for the project, Tsavo Trust now has a second aircraft, 5Y TTZ, and a second Pilot, Josh Outram. This has relieved some pressure on ACE, who was well overdue a 'face lift' and is now undergoing a total rebuild. In such a huge, remote place as Tsavo, an aircraft is a vital conservation tool, providing an additional ‘eye in the sky’ in conjunction with KWS’s own aircraft.

Following the death of the iconic Tusker known as “Satao” in May 2014 (via a poachers poisoned arrow), the Tsavo Trust established a mobile Tusker monitoring unit called Tembo 2 team in October 2014 as a follow on to Tembo 1 anti-poaching unit (established in June 2014).

Tembo 2 team is not directly involved at the sharp end of anti-poaching, but more alongside KWS Research and Monitoring Departments within the TCA, mainly in Tsavo East National Park (TENP). The main emphasis here is to monitor the large Tuskers as often as possible in-situ on the ground and frequently in tandem with aerial activities whereby ground deployments can be guided. In so doing a layer of “eyes and ears” at ground level is achieved to compliment the “eyes in the skies” under the aerial unit.

A combined ground and air project has proved to produce far better monitoring results and in turn provides greater security for the big Tuskers. For example in September 2014 there were only 14 different observations made of Tuskers (12 known individuals) yet in September 2015 there were 62 different observations made consisting of 10 iconic bulls, 4 emerging bulls and 3 iconic cow Tuskers. Within the TCA only 10 remaining big iconic Super Tuskers exist (those with ivory to the ground and over 45kg each tusk), a further 16 emerging bull Tuskers and 7 iconic cow Tuskers known and recorded to date.
Establishing Tembo 3 and Tembo 4 teams:

With additional funding support the Tsavo Trust plans to establish and deploy a further 2 more mobile field based monitoring teams – Tembo 3 and Tembo 4 teams. For the reasons shown above this is a vital extra component in order to tackle the ever-growing pressure on elephant populations but also essential if the big Super Tuskers of Tsavo are to survive and pass on their unique and rare ivory genes to further generations.

As well as contributing to scientific data collation, the reports transmitted real-time from the Tsavo Trust aircraft can assist KWS in mounting an appropriate response to any identified threats to Tsavo’s elephants. To that end, the KWS team on the ground has warmly welcomed the Tsavo Trust’s participation in their conservation efforts. Considering the sheer size and geography of the area being surveyed, no single effort can ever be a ‘catch-all’ solution – but the Tsavo Trust aircraft and ground monitoring units can make a measurable difference to the safety of elephants in Tsavo – and so can you by helping us to do this job.

Protecting Tsavo’s magnificent ‘hundred pounder’ elephants is not just a question of conservation. These giants among giants also represent a significant economic asset to Tsavo and to Kenya. Tourists coming to view Tsavo’s wildlife are staggered when they encounter one of these mighty beasts, and just knowing that they are there draws many people to Tsavo, bringing with them tourism dollars, employment and wider business opportunities. From a biodiversity perspective too, these animals are rare specimens, the pinnacle of their species.

OUR LAST CHANCE IS NOW

Today, we are witnessing an ‘ivory rush’ fuelling a poaching frenzy, unchecked by weak legislation which provides little deterrent to poachers, while the Far East lusts - seemingly insatiably - for more and more ivory. Tsavo’s last surviving ‘hundred pounders’ and the elephants following in their footsteps are in peril. They need all of our help. Once the ‘big tusker’ gene is gone, it is gone forever.

AN INVESTMENT FOR ELEPHANTS AND PEOPLE

It costs Tsavo Trust £5,500 / $8,000 each month to keep our aircraft flying over Tsavo, monitoring Tsavo’s last great tuskers and famous red elephant herds. Your donation can help provide extra protection for these awesome giants of the animal kingdom, while safeguarding people’s livelihoods that depend on wildlife tourism.

Any amount, large or small, will do a lot to help - here are a few examples of what your donation can accomplish:

£5,500 / $8,000 keeps our conservation aircraft airborne for one month, including fuel, maintenance and all associated running costs.

£625 / $1,000 covers the cost of two essential aircraft safety and maintenance checks, required by law every 50 hours of flying.

£160 / $260 keeps our conservation aircraft in the air for one hour, including fuel, maintenance, and all associated running costs.

£120 / $185 contributes towards the salary of an aircraft attendant, helping to provide employment in an area of high unemployment in Kenya.

£16 / $25 pays for a monthly supply of aero oil, essential for the functioning of the aircraft.

£10 / $16 provides a useful contribution to Tsavo Trust's 'Large Elephant Monitoring Project' when combined with support from our other partners.

Stuart Herd, a Kenyan entrepreneur who has generously supported Tsavo Trust from its inception, has loaned Tsavo Trust the light aircraft 5Y-ACE, an invaluable contribution without which the project would not be possible.

Thanks also to Ian Craig, Garry Cullen, Marie de Brouwer and Tina Allen for their contribution towards the construction of Tsavo Trust’s ‘Ngiluni Airstrip’, from where 5Y ACE takes to the skies.

Save The Elephants, a highly respected elephant research & conservation organisation, which has been working with elephants in Kenya for twenty years, has come forward with substantial support for Tsavo Trust’s 'BIG TUSKER PROJECT'. They have already funded the initial aircraft service, ensuring the airworthiness of our light aircraft, as well as funding the construction of a hangar to house it and protect it from potential saboteurs and – you guessed it – mischievous elephants! Save The Elephants have pledged further funding throughout the year to help keep the Tsavo Trust’s eye in the sky up there, where it needs to be to help look after Tsavo’s great tuskers.

Tusk Trust in the UK is partnering with Tsavo Trust to provide us with a fundraising platform. That’s why this page which you are on now links to their JustGiving site – but rest assured, thanks to Tusk’s support, your donation will find its way efficiently and expeditiously to us here at work in Tsavo, Kenya.

African Environmental Film Foundation (AEFF) and Tsavo Trust are developing a partnership to fulfil a conservation education role alongside the provision of hands-on conservation solutions.

Tsavo Trust’s ‘BIG TUSKER PROJECT’ is conducted in support of and alongside the Kenya Wildlife Service, whose mandate includes the management of Kenya’s National Parks and protection of all the country’s wildlife, no matter where it exists.

Tsavo Trust is a Kenyan non-profit organization, formed by five long-time Tsavo residents - professionals from the conservation, wildlife management and legal fields who share a passion for the region. Recognizing the interdependent relationship between wild animals, people and the environment, the Tsavo Trust’s goal is to support wildlife, habitats and communities in the greater Tsavo Conservation Area.

Due to its vast size and magnificent biodiversity, Tsavo is one of Kenya’s most important ecosystems. Spanning 42,000 square kilometres, the TCA incorporates the country’s largest officially protected areas (the adjoining Tsavo East, Tsavo West and Chyulu Hills National Parks, managed by the Kenya Wildlife Service) as well as surrounding cattle ranches, private and communal lands (many of which host large numbers of wildlife dispersing from the Parks, including elephants).

Your donation here can help protect some of the world’s last remaining great giants of the elephant kingdom still surviving in the greater Tsavo Conservation Area.

Tusk is a dynamic organisation with over twenty-five years experience initiating and funding conservation and community programmes throughout Africa. The charity, whose Royal Patron is Prince William, supports over 60 projects to protect wildlife and also promote education and alleviate poverty.