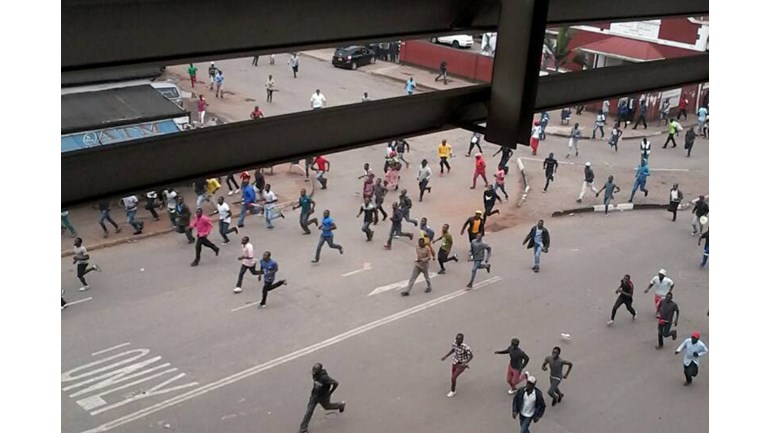 These are worrying times for Zimbabweans. With 93 year old President Robert Mugabe refusing to stand down and the Zanu PF ruling party in disarray, the army has staged a Coup d’Etat.

The international union movement’s solidarity with Zimbabwe’s workers is critical right now. Can you help us raise £5,000 to support local unions’ work to support ordinary Zimbabweans’ rights at a dangerous time?

Once a relatively developed African nation, for decades Zimbabweans have watched their economy, institutions, public services and infrastructure fail. But one positive constant has been the Zimbabwean trade union movement, the ZCTU.

Defending the rights of ordinary workers, it has remained brave, independent, democratic and influential. They even established, and then became independent from, the only credible opposition political party in Zimbabwe, the Movement for Democratic Change.

But they’ve suffered for it. Over the years their offices have been raided, phones tapped, leaders beaten up and detained on trumped-up charges. Time and again Zimbabwean union activists and staff have answered the call for their fellow workers, despite the heavy personal price.

And with a failed economy and at times, workers too poor or scared to pay subs, the unions themselves have struggled to cover the costs of their work – they have to operate on an absolute shoe-string budget.

Some world leaders don’t mind this coup, but any coup steals a country’s democracy. The ZCTU is working for a peaceful and constitutional return to order, and to protect ordinary people’s democratic rights and livelihoods at a time of chaos and change.

The British union movement has a rich history supporting our Zimbabwean sisters and brothers, and they are now appealing for our help once again. They need to urgently consult their branches right around the country, find out what’s happening on the ground, support local activists and develop an action plan for the movement in these crucial days.

This may seem like normal union business, but this is a large and very poor country and these are dangerous times. They need to find safe meeting places, get more mobile phones running, and find secure and safe ways to get around the country.

We’re aiming to raise £5,000 as quickly as possible to help pay for this vital work.

A little bit of money goes a long way in Zimbabwe right now. This is time critical. Please give as much or as little as you can and don’t underestimate how much difference your contribution makes.

Charity Registration No. 299832
Find out more about charity fundraising