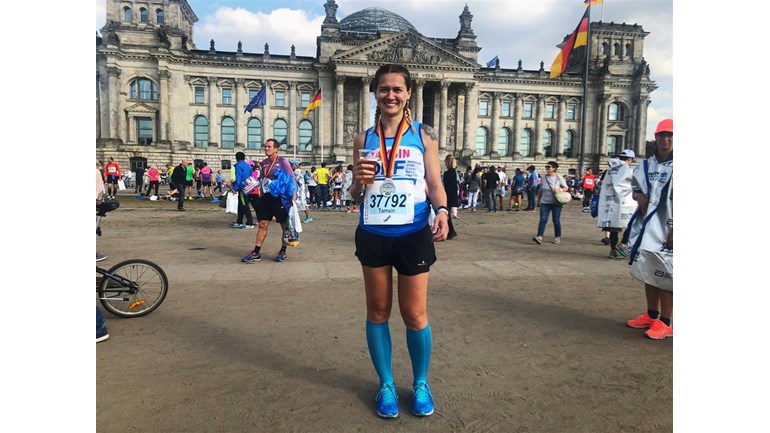 I am running for JDRF because I want to create a world without type 1 diabetes!

Thank you for taking the time to visit my Just Giving page.

Taking part in the London Marathon has always been a dream of mine - ever since I began running as a teen. Back then, even a half distance terrified me. Regardless, I applied for the LM ballot year after year. I was unsuccessful every time.

Eventually, I resigned to the fact that if I waited for London I might never complete a marathon, and so I entered New Zealand's first International Marathon in Queenstown. But then I was diagnosed with type 1 diabetes 2 months prior to the race.. which made it even more difficult than it should have been! A year later, entered the same Marathon again, and the same thing happened (my blood sugar plummeted after half way). The same thing happened during the Berlin marathon in 2018.

So to say that I have unfinished business with the marathon distance is accurate - and I still have my dream of taking part in London. That's why this year, just before turning 30, I'm attempting to complete the London Marathon AND Brighton Marathon...two weeks apart from each other.

I'll admit that part of me is petrified of that half way line and what lies beyond. Having your fears and dreams exist in the same place makes chasing the dreams all that more difficult. But that doesn't mean that we shouldn't try. That's why I'm dedicating the next 16 weeks of my life to staying in nutritional ketosis and training (as well as working, cycle commuting and studying to become a dietitian!) for the Brighton and London Marathons.

My primary reason for running the Berlin Marathon was for Sasha, a young lady who was diagnosed with type 1 diabetes in 2016 aged 10 - and subsequently spent 3 days in intensive care with severe DKA. Initially, her mother was going to run the Marathon but suffered an injury and so I took her place. My motivation and inspiration for running comes in the form of showing Sasha and other young people with type 1 diabetes that it never has to hold you back.

It was a cold September morning in 2014 somewhere amongst New Zealand's Southern Alps when I went out for breakfast. I'd treated myself to a pancake stack and thought nothing of the immediate tiredness and light-headedness. It had been my body’s normal reaction to an average meal for some time.

Exactly two hours after laying down my knife and fork, a nurse was testing my blood sugar/glucose (BG). Herself and a dietitian had guesses over what my BG level was going to be (the normal range is 4-8 mmol/L) and they suspected I’d be in the high teens when the monitor beeped with my result: 31 mmol/L. ‘You have type 1 diabetes’, she said, immediately and matter of factly. I started to cry. Despite having had all the symptoms of type 1 diabetes, I was in shock and my head was swimming. How has this happened? Why do I have diabetes? Is this a mistake? What does this mean now?

Everything I knew about myself and my body had been blown to smithereens and I was forced to start from scratch. After a while of getting used to living with type 1, I built up the courage to lace up my trainers and take it outside. I'd begin to learn that running wasn't to be feared with diabetes, it was just something to manage.

What is type 1 diabetes?

Type 1 diabetes is an autoimmune disease - which means that the pancreas fails to produce insulin. Insulin is a hormone which circulates in the bloodstream and allows the glucose which has been broken down from food to be able to pass into the cells and used for energy.

But it can be managed.

What this means for me (and other diabetics) is a life full of numbers, of having to think about every item of food and drink that goes past my lips. I have to carry my glucose monitoring kit and insulin around with me everywhere I go. And every day for the rest of my life I have to prick my finger and inject myself. Yes, it hurts and yes, it’s uncomfortable but it’s going to keep me alive. Life may have just dealt me a bad hand, but it’s all about how you play it, and I plan on winning with mine.

Soon after my diagnosis, I realised that I had to go back into education and become a Dietitian to help people with chronic illnesses regain control of their health and ultimately their lives.

I've spent the last 3.5 years sharing my experiences with diabetes and running (@type1diabeater on Instagram), as well as posting daily food photos for inspiration. I returned to England in September 2016 to self fund a £9,000 Science Foundation Course (whilst simultaneously working 3 part-time jobs!).. and after a whole lot of blood, sweat and tears (literally!) I've finally found myself in London, studying Nutrition and Dietetics at King's College.

On top of wanting to become a Dietitian, I also want to help speak out about the issues diabetics face in the world, and show support to other diabetics and their families - as well as showing that you can do anything with type 1 diabetes!

JDRF fund research that will cure, treat and prevent type 1 diabetes and its complications. Their global programme funds more than 500 active research projects around the world and supports more than 70 clinical trials at any one time. Internationally, JDRF has funded £1.43 billion research to date and last year spent almost £72 million on research globally.

JDRF focus on investing in research that will transform the lives of people living with type 1 diabetes - improving treatments today until they find the cure.

Charity Registration No. 295716
Find out more about charity fundraising