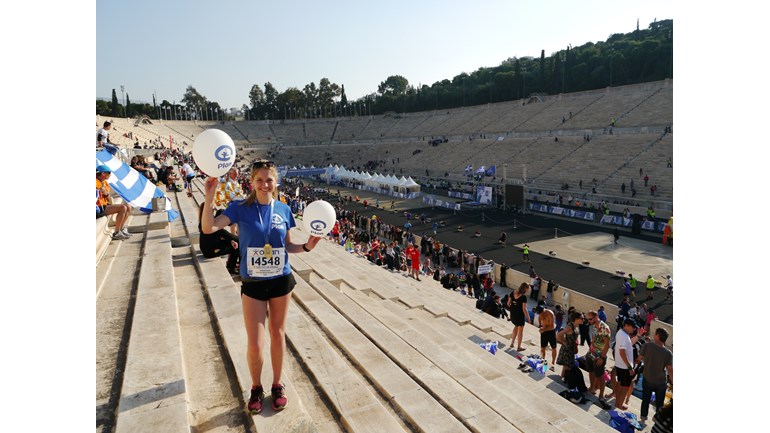 I am running the Athens Marathon for Plan International UK because they build a better future for children worldwide.

We work with the world’s poorest children to help them build a better future.

On Sunday 8th November 2015 I will be running a whole 26.2 miles in the Athens Marathon to fund raise for Plan UK, a very worthy charity which works with the world’s poorest children across countries in Africa, Asia and Latin America, to help them move from a life of poverty into a future with opportunity.
Of all the issues that Plan UK tackles, the campaign that resonates most with me is the work the charity does in support of every girl’s right to live safe from violence, to go to school, to take key roles in their communities, to marry who they want, when they want and to have their voices heard. I believe that it’s every woman’s duty to help other less fortunate women and girls, and supporting Plan UK is the very least I can do.
Why have I chosen Plan UK?
If my travels have taught me anything, it's that the world is full of injustice and that in the UK we are hugely lucky to live in such a developed nation with all the safety and security that entails. However there are millions of people around the world living in extreme poverty, with little hope of ever escaping. Of these millions, the worst affected are women and children. Having seen what I've seen during my travels, I simply cannot stand by and do absolutely nothing. Earlier this year I became a Digital Ambassador for the charity Plan UK, helping to promote their cause through my blog, The Well-Travelled Postcard, and I also sponsor a 10-year-old girl in Honduras through the charity, donating monthly to fund projects such as building schools, vaccinating children, connecting villages to a safe source of water, and stamping out child abuse. And now I want to fund raise for Plan UK by attempting to run a marathon!
Why the Athens Marathon?
I am by no means a natural runner - it's simply not something I enjoy! If I manage to survive this marathon, then I certainly will not be running another one ever again, so I had to choose a good'un! The Athens marathon is considered to be the marathon, as it follows the original course from the ancient Greek city of Marathon to Athens Olympic Stadium. The route was originally run in the year 490 BC by the Greek soldier Phidippides, who ran 26.2 miles from Marathon to Athens to bring news of the victory over the Persians at the Battle of Marathon, and then promptly died seconds after delivering the message.
If you’re able to sponsor my marathon, then I would really appreciate any donation, no matter how big or small!
£35 could help keep a girl in Uganda in school by providing a uniform, books, stationary and helping with the cost of transport
If you're a UK taxpayer then please do tick the Gift Aid box, which allows Plan UK to claim an extra 25p for every £1 you donate.
If you know me well, then you’ll know that I haven’t asked for sponsorship since I was about 12-years-old and forced into it at school - it’s not my usual style and is certainly not something I am going to pester people with year in, year out. As I’m only going to run a marathon once, I feel I owe it to the millions of young children in poverty around the world to run it for them.
Every mile of the Athens Marathon will be a struggle, but knowing that it's all for a good cause will help push me on towards the finish line!
Thank you so much for your support!
Virginia

Plan International UK is a children’s charity. We strive to advance children’s rights and equality for girls all over the world. Through our Because I am a Girl campaign, we're taking action to see a world that values girls, promotes their rights and ends injustice.