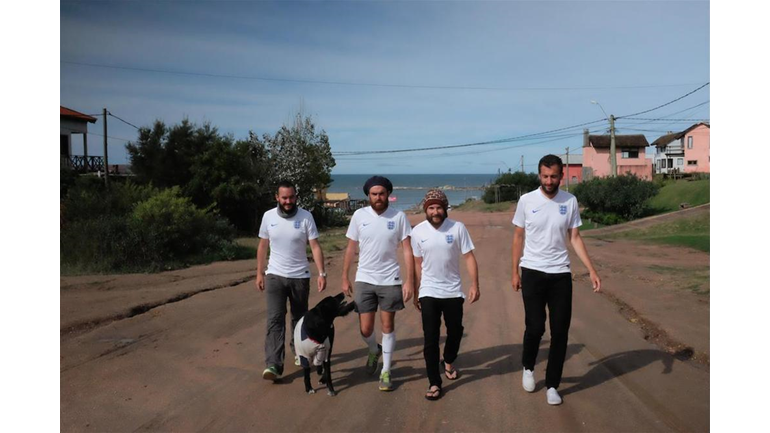 Walk to the World Cup boys and Jefferson

Walk to the World Cup

4 England fans and a dog walking 1966km to Brazil for J de V Arts Care Trust because £20,000 is needed to build a water well in Bahia

On March 3, Adam Burns, Dave Bewick, Pete Johnston and Ben Olsen set off from Mendoza in Argentina on an epic 1966km pilgrimage to the 2014 Brazil World Cup. Their journey so far has taken them through rural Argentina, Buenos Aires and on to Uruguay, where they've traversed the Atlantic coast to the Brazilian border.

Challenges so far have seen them take on the harsh desert of San Luis, travel along a live train line in Justo Deract and through the swampy marshlands of Olearta. The boys have been charged by bulls, electrocuted by a farmer's fence and almost caught hyperthermia during a heavy thunderstorm while lost near the small town of Washington in Argentina.

The four England fans aim to raise £20,000 for the J de V Arts Care Trust, a charity based in the north of England. The money raised will be used to build a new water well in Bahia, north-east Brazil, which is suffering its worst drought in more than 50 years. Ten million people have been affected and more than a million cattle have died. For more information on the drought in Bahia, please click here: https://www.youtube.com/watch?v=Exy8qE7tn-I

The Walk to the World Cup story took an unexpected twist when the boys were followed by a stray dog in the small Uruguayan town of Solis. The black labrador retriever, now known as Jefferson, continued to follow the boys until they set up camp for the night and when they woke up he was still there. Two and half weeks on and Jefferson is now a key part of the Walk to the World Cup team.

Now the boys have two goals: to raise enough money to build the water well in Bahia and find a loving home for their beloved and loyal companion, Jefferson Ramsey Moore.

At the time of writing the boys have just 28 days left to reach their destination and complete their two goals. Please give generously to our amazing charity the J de V Arts Care Trust and if anyone has a contact for anyone looking for the best dog in the world, email walktotheworldcup@gmail.com