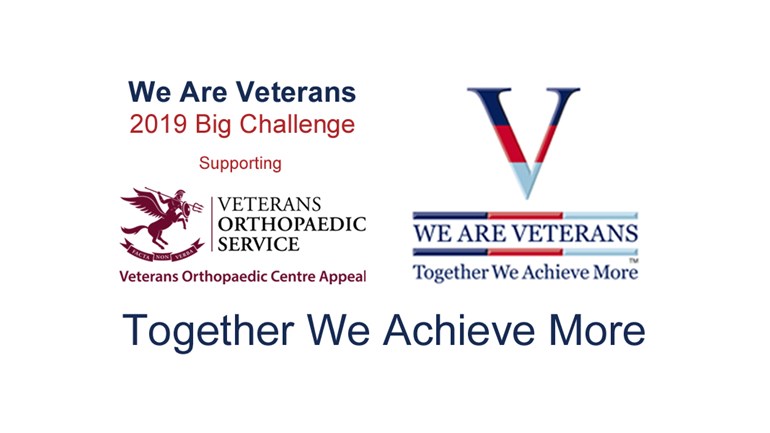 A 24 hour endurance event within 48 hours. for The Robert Jones And Agnes Hunt Orthopaedic And District Hospital Charitable Fund because Together We Achieve More

In July 2018, 27 members from the independently run Shrewsbury Armed Forces and Veterans Breakfast Club climbed the O2 in London to raise money for their chosen military-related charity, Blesma. They had a 9-year old dependant, an 81-year old ex RAF police dog handler and a hairy ex RE guy with no legs, what could go wrong! Absolutely nothing. It was a truly fabulous weekend.

The O2 climb had been their biggest event to date. Not only did they raise a fabulous amount, just over £11,000 for their chosen 2018 charity, but they all had great fun together whilst doing it; continuing the fun together well into the early hours of the following morning at the Union Jack Club

Inspired by the O2 Challenge the Head & Founder of the club, remembering the fun that was had in the 2018 O2 Climb, came up with an idea of how they could expand the challenge, to further include other veterans/veteran’s clubs/military organisations in a big fundraiser for 2019.

The idea was to organise an annual 'Veterans' Challenge'.

Veterans/veterans’ clubs/military organisations and their families would be invited to sign up, and those wishing to get involved would be taking part in the same challenge, over the same time period, for the same chosen charity/organisation, but at their different locations around the world. Essentially, uniting veterans in a fun, social event whilst raising funds via the challenge because ‘Together We Achieve More’.

And, so to enable this, the 'We Are Veterans Challenge' was created.

SAFVBC has set the ball rolling this year and has nominated the Veterans Orthopaedic Centre Appeal (VOCA), as the 2019 WAV Supported Charity.  The Centre is looking to raise £1.5 million to develop the Veterans Service. The Centre is located at the Robert Jones & Agnes Hunt Orthopaedic Hospital in Oswestry, Shropshire. Lt. Col. Carl Meyer leads the Service, delivering clinics for UK military veterans who come from all over the world to have hip and knee replacements at the Centre. Registered Charity Number: 1058878

The challenge will commence worldwide at noon on Friday 11th October until noon Sunday 13th October. Teams and individuals that have registered to take part via the 'We Are Veterans' website will be hitting the virtual road to Kabul, clocking up the mileage from the National Memorial Arboretum in Staffordshire to the British Embassy in Kabul. That's a whopping 3,599 miles to cover. We will cover the mileage by walking, running, swimming, cycling, rowing, skating, dancing, rolling, any which way that uses only human power, either indoors or outdoors for a minimum period of 24 hours.

Veterans, veterans’ clubs and military organisations wishing to get involved can register on the website http://www.weareveterans.co.uk a coordination and information point. They will register to take part in the same challenge, held at the same time, raising funds for the same military-related charity, at their different locations around the world. Uniting Her Majesty's Armed Forces veterans, serving members, their families and friends together in fun-packed, fundraising events worldwide. The 'We Are Veterans' website is due to launch in late March 2019

The Robert Jones and Agnes Hunt Charity raises funds to support patients and its staff to ensure we achieve our ambition to deliver world class patient care. It achieves this through fundraising and supporting others to fundraise on our behalf.

Charity Registration No. 1058878
Find out more about charity fundraising