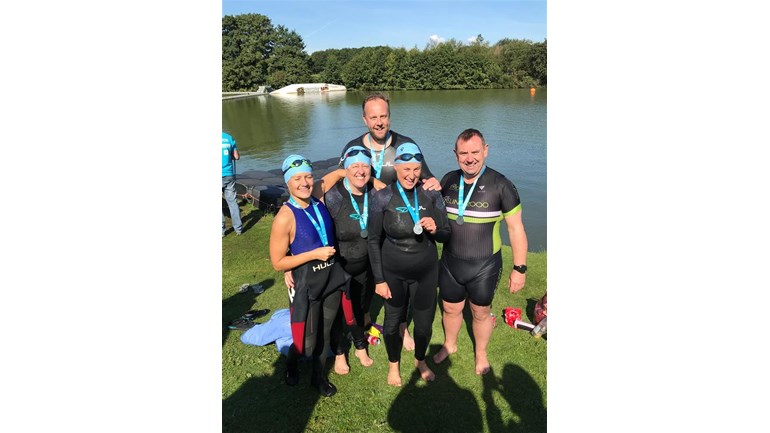 I am participating in a 5k open water swimathon for Cancer Research UK, Marie Curie & The Swimathon Foundation because their work is so important for our futures.

Cancer Research UK and Marie Curie are calling on the nation to take to the open water for Open Water Swimathon 2019 - thousands of swimmers, two great causes, one big charity challenge!

These two charities are very close to my heart and I would like to both raise awareness of them and to also raise some much needed funds to support what they do.

Back in April 2018 my husband Adam (then 48yrs) was diagnosed with nsclc Lung Cancer. This was very much out of the blue, and a great shock to our family. Over Easter he had surgery to remove part of his left lung, followed by 12wks of chemotherapy. At that point he was told that he was cancer free (hooray) but was given the opportunity to take part in an immunotherapy trial. This trial was a double blinded placebo trial, so we wouldn't know if he was on the real drug or not. It was a no brainer, with all of the extra checks and scans that went with the trial, and the opportunity of hopefully helping Adam and other cancer patients in the future we said yes. The trial was for 12mths.

Then in April this year (2019) following one of those early scans, we were given the devastating news that the cancer had returned. More surgery followed to remove a wedge of lung. Adam is now being treated with Targeted Therapy to hopefully treat the tumours that are left, and to be cancer free again. Without this trial there wouldn't have been early detection of the tumours (thank goodness for the trial).

So, it is so very important that Cancer Research have the funds to research and test up and coming drugs and treatments, to be able to help people like Adam and all other cancer patients fight their battles with the BIG C. They receive NO government funding for their work. This is about our futures and saving lives.

As for Marie curie, what a fantastic organisation. We have not as yet had to use their services, they help, support and care for not only the patients but their families too. Around 2,100 Marie Curie Nurses work around the clock in people's homes all over the UK. None of us know what's around the corner and when we might be asking for support ourselves.

If these charities are as close to your hearts as they are mine, I would as you to support myself and my team of Wetsuit Warriors to raise much needed funds for them by donating on our JustGiving page.

With all of my heart thank you for your support.

Find out more at https://openwaterswimathon.org

Cancer Research UK and Marie Curie are calling on the nation to take to the open water for Open Water Swimathon 2019 - thousands of swimmers, two great causes, one big charity challenge!

The Swimathon Foundation (TSF) owns the annual national Swimathon event. Cancer Research UK and Marie Curie are uniting as partners for Swimathon to raise as much money as possible for two causes close to the nation’s hearts. This is your chance to fundraise for both incredible causes.

Charity Registration No. 1123870
Find out more about charity fundraising