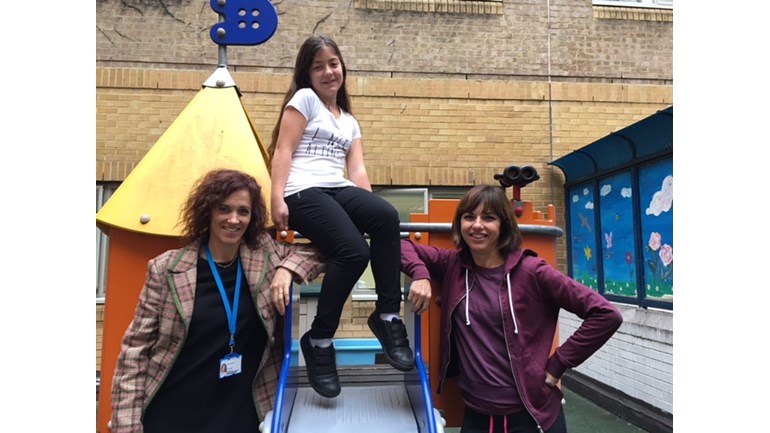 Thanks for all the donations so far! Still a way to go!

For those of you who don't know our story, here it is in a nutshell: in 2011, my daughter Edie was diagnosed with encephalitis, which saw her rushed to The Whittington with her first seizure. She spent three nights battling the illness in the Ifor ward before being transferred to St Mary's Paddington intensive care unit, where she spent another 10 days, then a further week in the high dependency unit.

We were told to expect the worst - but that if she did pull through, the best case scenario would that she would be left with epilepsy. Thankfully, she did make it, but her epilepsy is severe, and it has resulted in many blue-light trips to The Whittington, where we've had the very best of NHS support from the wonderful staff.

How Kerry got roped in

I was already friends with Kerry when all this happened - she was working at Great Ormond St and helped us see the right people there; in fact, Edie has just undergone VNS surgery at GOSH (to the uninitiated, it's like a pacemaker, but for the brain). Kerry later transferred to The Whittington as a consultant paediatrician, specialising in epilepsy - a real boost for us and other patients who see her, either for epilepsy, on the ward or in A&E.

We've spent - and likely will spend - many a day and night on the Ifor ward overlooking the deeply depressing outdoor space that could, with a bit of investment, be a great place for recovering children to look at or even play in - and for parents to get a breath of much needed fresh air. At the moment, it's dingy and uninviting - the picture says it all. So when I finally had energy to give a bit extra back to the hospital (let's face it, it's not coming from central government in the near future), I was delighted to discover there were plans (although no funds as yet) to transform the space. More on that as time passes!

I'm aiming for £20,000, a huge figure we'll probably never make - but it's worth being ambitious! I'm also setting up a separate bank account to take cheques and cash for anyone who would prefer to do that instead. Edie's already raised £10 selling loon bands at the front gate - maybe you would like to do something similar? Let me or Kerry know!

Kerry and I decided on a 300km Kerala cycle trek as we thought it sounded tough but doable - and it will be more interesting than cycling around Highgate Woods 300 times (which someone did suggest as a cheaper alternative - but they didn't know that I've barely travelled since Edie fell ill so have been saving my holiday funds!).

Don't feel you have to donate loads, but if you could share/tweet/write/email/phone anyone you know who uses The Whittington or anyone who just wants children and their stressed parents to have a more pleasant stay in hospital, we'd be really, really grateful.

Whittington Hospital Charitable Funds supports all services across Whittington Health NHS providing integrated hospital & community care services to 500,000+ people across Islington, Haringey & beyond. Please choose a ward, department or service in the community you would like to support.

Charity Registration No. 1056452
Find out more about charity fundraising