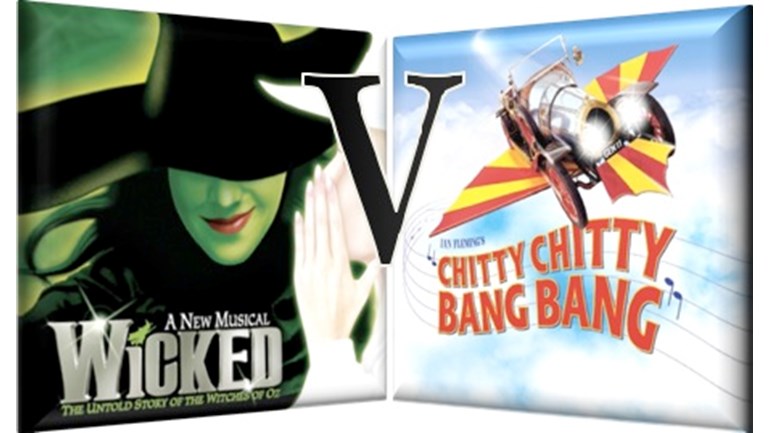 *** HELLO AND A HUGE HUGE HUGE THANK YOU TO EVERYONE WHO HAS HELPED US *SMASH* OUR TARGET! ***

This page will stop taking donations on Friday 3rd September.
On Friday - 27th August The boys at WICKED London played in a charity football match against The UK TOUR of CHITTY CHITTY BANG BANG.

Together, with 'CHITTY' we are raising money for GOSH (Great Ormond Street Hospital Childrens Charity) for more info on GOSH please visit www.gosh.org

As you may know the match was a HUGE success, your extremely generous donations have been flooding in and all your support, either online and/or at the match has been so incredibly overwhelming!
The match finished:
WICKED 7 - 2 CHITTY
It was a great day with a fantastic crowd of family, friends and fans cheering everyone on on a day that threatened rain yet remained wonderfully dry!
ACT 1:
After a blitz of CHITTY'S goal, protected only by what can be described as 'a hero's performance' from their Goalkeeper Ben Harlow WICKED finally broke through first after rattling the bar twice following a header from Jack Wilcox and a 25yrd strike from WICKED captain Danny Mac for the ball to fall simply to Gareth Chart in the 6yrd box for the match opener.
CHITTY equalised not long after after with a very fortunate 'cross' beating WICKED keeper Tommy Sherlock performing a schoolboy error anticipating a '6yd box cross' that never was! The remainder of the first half played out fun and fair up until half time.
INTERVAL: WICKED 1 - 1 CHITTY
ACT 2:
Following our traditional half time oranges both teams lined up to begin the second half. CHITTY started strong with a few attacks followed by a 28yrd free kick opportunity which was neatly put away by CHITTY captain Sam Hiller into the top right corner of WICKED'S goal with an unfortunate Sherlock unable to see the ball until late, blinded by a box full of distractions. CHITTY'S high-flying spirits were soon grounded with a touch of class and quick thinking from WICKED striker Chart, who directly from kick off, took a wonderfully optimistic strike on the Referee's whistle with glorious results, lobbing an unexpectant CHITTY keeper who could only scramble back in time to push the ball into the top corner of the net. - This, taking the wind from beneath CHITTY'S wings, allowed WICKED to take off and fly free towards a feast of goals: Chart managed to snatch himself another 3 goals before full time to take his total to 5 and WICKED'S very own leading man Lee Mead (after being strongly marked in the first half) broke free to grab a slick 1-on-1 finish followed by a sweetly struck half volley from the edge of the box to take WICKED'S total to 7! The game finished with smiles all round and a great day had by all!
FINALE: WICKED 7 - 2 CHITTY

*A Massive thank you to CHITTY skipper SAM HILLER for helping organise and get the CHITTY guys all the way to London and back for their show in the evening and also to DON WALCOTT who played for CHITTY and who is the father of England and Arsenal star THEO WALCOTT, who also kindly donated some signed pictures which were auctioned off after the game and generously purchased!*
WE ALL HOPE YOU CAN STILL DONATE TO THIS GREAT CAUSE AND SPONSOR US ALL IN WHAT WAS A GREAT FUN FOOTBALL MATCH FOR AN INCREDIBLE CAUSE!

A huge thank you again to all who have so kindly donated and supported us before, during and after the event. Every penny you donate is hugely appreciated and every little helps! :-D

Best Wishes from all of us at WICKED & The UK TOUR of CHITTY CHITTY BANG BANG!