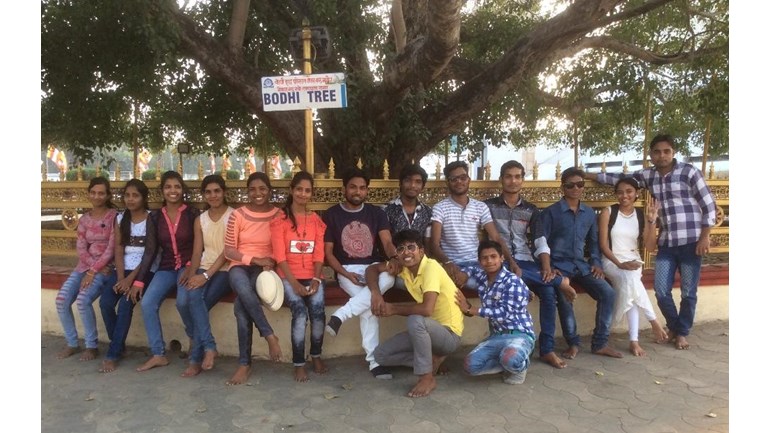 I am still raising funds for Dhammaloka because these young people can have a bright future!

We are very excited to announce the launch of a new video which features some of our wonderful students. In the video we also want to share with you how we hope to raise £5,000 to reach our overall target of £20,000. We are so very close! We hope you enjoy the video as much as we enjoyed making it. If you would like to find out more about the project, what we are planning for the future and what we have already achieved, please read on....

We are still giving training in computing, and other desirable employment skills, to young people from deprived communities in India. 16 young men and women will be fully supported again for 6 months. At the end of the course they can get decent jobs, and lift themselves and their families out of poverty. The  amount we need to raise, for their full support and certification, before the end of March 2019, is added to the total already given, for previous intakes of students. Your generosity has helped to build a new life for 160 young people so far.

The project is still going strong, as young people now come from distant villages every year, drawn by its growing reputation and results - job placement was the best ever, last year.

But the best news of all, is the expansion of the project, to give life chances to hundreds of young people. Two or three young women and men, come forward every year, to train as managers and teachers at Aryaloka. They can then run computer centres being set up,  in Chhattisgarh, Bihar, and Orissa. These are three of India's most poverty-stricken states, where young Dalits have almost non-existent chances of career development. Hundreds of these young people have been helped to find employment, and computer centres are in process of being set up in other states too - with your help! The September intake of students cannot take place, without your support.

Many thanks to all of you, who have contributed so generously to make these projects possible, and to give a new future to talented young people from poor families in many different areas of India. Here is an update on the signs of success so far, and ongoing and new projects.

For more detail, and the students' stories in their own words, see our website www.youngindianfutures.org

A community of working women has now been established in Raipur, principal city of Chhattisgarh. This is a state with much poverty in the countryside, and no opportunities for skills training. Many of the young women we have trained are now living together, working together, supporting themselves and their families, and sharing their skills to inspire many more groups of young women to follow their example.

At Aryaloka Computer Education Institute, Nagpur, 19 young men and women are being trained in General Computing skills, plus Hardware and Networking repairs which will give them an edge in this burgeoning jobs market. Two more talented young people are training in Animation skills, practising at Aryaloka on Government projects.

These opportunities to lift themselves, their families and communities out of poverty, would be completely closed to them without your generosity.

8 more students from very underdeveloped states (Bihar and Arunachal Pradesh) are being supported in a Graduation Project, as potential leaders of their communities, presently marginalised by caste, poverty, and gender discrimination.

They are all delighting in the freedom-with-empowerment setting of cooperative communities; one of them purpose-built. All of their families are far too poor to afford them any opportunity like this.

Their courses will finish in February 2014 - they will then be supported for a little longer until they take their next step on their career ladder. Then we hope to fund more training communities based on the success of the present ones.....dependent on the generosity and efforts of donors and fundraisers.

Out of 10 young people trained in Animation and computer skills at Aryaloka Computer Education institute 2009-10, nine have now found jobs in those fields. Two have found jobs as Animators with high salaries; but perhaps the most satisfying result is that 4 from the 6 women who lived and studied together for a year in the Maitrikula women's community adjacent to Aryaloka, have found work in photo studios, enjoying self-reliance and growing career opportunities. One woman is now teaching Animation at Aryaloka itself. One woman is working in her father's internet cafe. One of our star Animators has found employment with a TV Company as an animator, in Nagpur, her home city;  two of our ex-trainees have embarked on rewarding careers in Bangalore; and one in Delhi.

All these are now helping to support their families as well as themselves. Those who are breaking through to success are very active in supporting and encouraging the students still in training,or still trying hard to build a career.

Business planning workshops,development programmes, and visits to remote villages and places of historical interest, were the objectives of the trip which Helen Sullivan, Priyadaka, and I took in January '11, to this beautiful state with its hidden strata of awful poverty. The young people who organised the trip, most efficiently, are seeking to improve the lives of marginalised people of their own background, mostly followers of the great leader of erstwhile 'Untouchables', Dr. B. R. Ambedkar. To give them a means of self-support for this work, we are currently looking at the development of tourism/pilgrimage in Orissa (Odisha), which will combine their knowledge of their own traditions with a flexible means of earning.

The success of the Aryaloka computer centre as a thriving business training young people from poor backgrounds, has helped us to incubate a scheme to duplicate that model elsewhere, in parts of India where our ex-trainees can use such a centre as a base for their community development work. The most forceful participant behind  this initiative is Phoolmani, one of our young trainees now earning her living (and  learning the trade) in a photo studio. The intention is to set up a computer centre in Raipur, main city of the state of Chhattisgarh in central India, where village life is being rapidly replaced by heavy and brutal industrialisation. This Right Livelihood initiative should offer an alternative career to a large number of young people with whom we already have contact.

In Odisha, a tailoring training group for women in a remote village in a poor area, is all set to go ahead, with 30 young women eager to learn this useful and potentially liberating skill. So far, they have only one sewing machine, (they need 4 more) but a detailed business plan (thanks to Helen and Trinath) and a lot of enthusiasm.

The number of young people looking for us for training and living support this year (2012-13) could be as many as 30, including more young women from Bihar. Their families cannot help them, so we look to you.....

Again thank you, for making all this possible, and changing so many lives for the better.