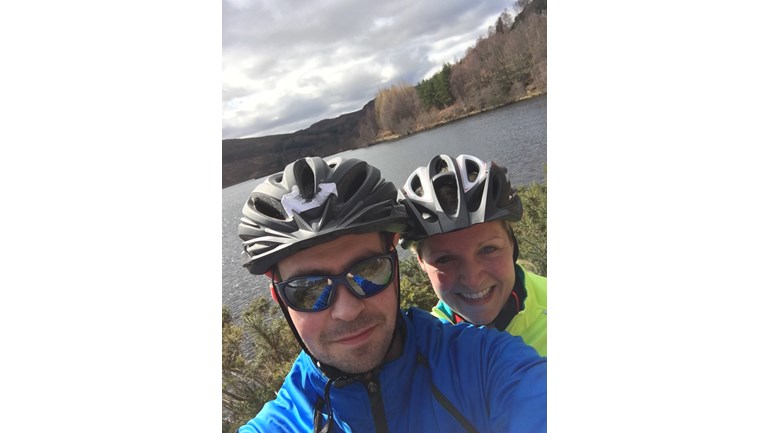 Blenheim Triathlon on June 5th for Bloodwise (formerly Leukaemia and Lymphoma Research) because to support an amazing charity.

We are taking part in the Blenheim triathlon on June 5th, alongside other Dragon Staff and parents. Last year Emma completed the run as part of a team, while Andrew completed the triathlon. Wanting to complete the triathlon together, Andrew signed Emma up unknowingly and now we are both going to attempt to complete the triathlon in support of this amazing charity. The last time Emma got on a bike before February she fell off into the road and that was when she was about 12! As for the swim we are both like fishes out of water, so the preparation has not come easily. The triathlon training has taken Emma completely out of her comfort zone! She didn't even own a bike before February and getting on a bike has been an experience and a half! When she first started, she went up hills faster than she came down! Its been tricky juggling 20 boarders, 2 young children, teaching commitments and life in general - as well as fitting in training, but we are determined to complete the triathlon and to raise funds towards Bloodwise.

We are doing the triathlon for an amazingly brave little girl called Scarlett, who has had to live with Leukaemia for most of her young life. She is our motivation and inspiration as we wanted to show our support to her and the Clarkson family. We have got to know the Clarkson's well as Madeleine, her younger sister, has come to board at Whitty's. They have inspired us with their courage and positivity through the last few years. In addition we wanted to raise money for the Bloodwise charity, that helps support the research into trying to beat blood cancer. We have the opportunity to raise life changing funds and anything that you give will go along way to supporting such a worthy charity.

Andrew and I want to thank you for anything that you can give but encourage you to dig deep for such a worthy cause. We are truly grateful for supporting us and the charity.