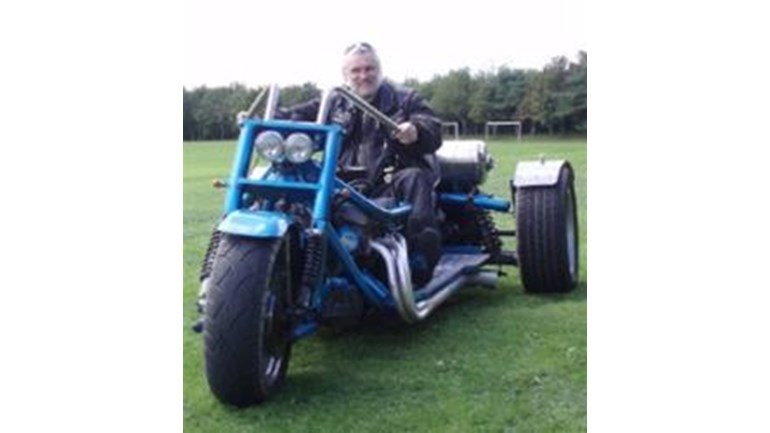 For those in a hurry here's the Executive Summary:

St. Michael's Hospice in Hastings - charitable organisation, looked after my Brother, pictured (on a trike he built), who died recently of prostate cancer, wonderful and caring staff, vastly improved my Brother's and my family's quality of life, it would have been difficult to cope without them.

I'm planning 1000 miles in < 24 hours, on a motorcycle, in the UK, in winter (December 15th) to help raise funds for the Hospice. Please click the relevant button to sponsor me and donate money to a very worthwhile cause.

Here's the long version for the rest of you:

The BBC reports that 10,000 men die every year from prostate cancer in the UK. That's 27 a day or more than one every hour. In September of this year my younger Brother Steve, pictured (on a trike he built), joined that group; he was 48. He went to see his GP last year as soon as he noticed any symptoms but, sadly, it was already too late for current medical understanding to offer anything other than palliative care.

A few months after his diagnosis Steve was in severe pain. It was obvious this was beyond his GP's knowledge and the hospital didn't seem to have much experience of pain relief for terminally ill patients. With the aid of Steve's Macmillan Nurse we contacted St. Michael's Hospice in Hastings and it was like a breath of fresh air.

After a short in-patient stay they had Steve's pain under control and gave him the ability to live the rest of his life. There were occasional relapses and their Hospice at Home service was on hand 24 hours a day every day to visit Steve and offer practical and medical aid and advice. In August this year Steve began to succumb to the disease and was admitted to the Hospice where he died, surrounded by his family and with friends in close attendance, on September 3rd.

It is difficult to put into words the difference the Hospice and its staff made. No-one else seemed to have the understanding of pain control that these people have, no-one else was available to us whenever we needed them and no-one else seemed to care quite as much as they did. Without them Steve's quality of life would have been very different. We are quite a large family and Steve has many friends so when Steve was at the Hospice we often swamped them but there were no complaints, just kind words and cups of tea. Dr. Board, the care, love and dedication exhibited by your staff and you made a significant and very positive difference to the life of Steve and our family and we cannot thank you enough.

As a family we have always be 'in to' motorcycles and shortly after Steve's death I resolved to do 'something' that I could raise sponsorship for to help the Hospice funds. My initial thoughts were to repeat the Lands End to John O'Groats ride that we did in 1986 in aid of Children in Need. Then someone pointed me at this page. Hmmm, a thousand miles, in less than 24 hours, on a motorcycle. It's something I've done before but that was a very long time ago when I was a lot younger and had fewer aches, pains and mended broken bits! It could be a bit of a challenge.

According to that web site there are around 90 people in the UK who have documented such a trip and, as far as I can tell, most, if not all, of those were done in spring and summer to maximise daylight and in the hope of good weather. So, just to make things a bit more 'interesting', I intend to do this on December 15th this year. A fellow biking masochist is doing a similar run at a different time on the same day and will be riding for his own chosen charity.

So, that's what I have planned, what can you do? Well you can click the button and donate some money to St. Michael's Hospice. If our experience is anything to go by you can be sure that money will be used to vastly improve the quality of life of someone who is terminally ill and that of their family.

This page is about St. Michael's but I'm here because of how they helped Steve so here's a link to something I wrote in September that will tell you a little more about him.

PS. Donating through this site is simple, fast and totally secure. It is also the most efficient way to donate: St. Michael's Hospice will receive your money electronically and, if you are a UK taxpayer, an extra 28% in Gift Aid will be added to your donation at no cost to you. If you're not comfortable with donating via this web page and would like to donate another way you probably know me so please feel free to contact me.

If you've arrived here somehow without knowing me and would like to donate without using this site please email me - smh at thewellers dot net (removing the spaces and replacing at and dot with @ and . respectively) - or contact Cheryl Davies at St. Michael's Hospice.

Well that was quite enjoyable…mostly!

My starting petrol receipt was taken at 05:07 at the Tesco filling station in Whitfield just outside Dover. I then headed through Dover to Bristol, Glasgow, Edinburgh then down the A1, A14, M11 and back towards home where I took a petrol receipt at the same filling station at 20:43, having logged 1062 miles according to my SatNav system.

The weather was kind. It was cold, dry and mostly clear although there was quite a bit of fog as I entered Scotland. On the way back down from Edinburgh to Newcastle it was extremely cold – the fields and side roads were completely white, covered in ice and frost – but gloriously sunny.

As expected, I needed longer stops on the way back down due to the injuries I’m carrying from various episodes in the past where I've discovered I don't bounce well; I think it’s fair to say they were aching somewhat.

I was surprised that I didn’t feel particularly tired but I was kidding myself as the second my head hit the pillow I was out like a light and I didn’t surface for 8 hours.

I’d like to thank all of you who donated for your generosity. Both the Hospice and I are very grateful and I know they will put the money to good use.

This page will remain open for a while in case anyone else would like to donate.

Each year the Hospice needs to raise over £4.3 million towards the cost of running its services which include: the In-Patient Unit, Day Services, Hospice at Home, volunteer-led Hospice Neighbours, Bereavement Services and Night Sitting.