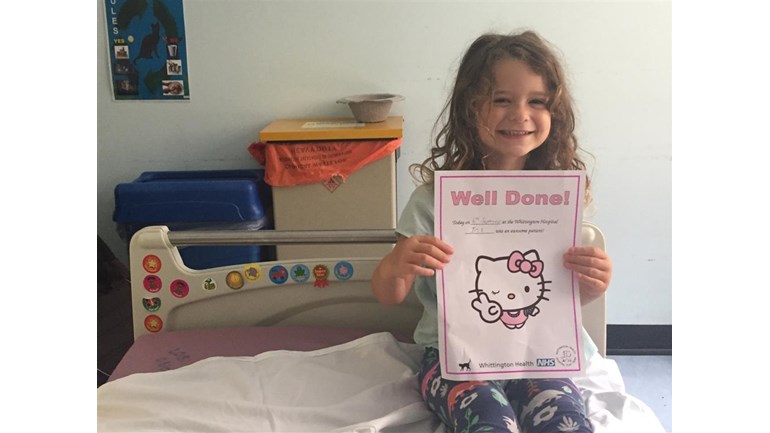 In 2019, the Ifor Ward's Children's Play Terrace will be redeveloped, a safe space where young patients are provided with a variety of physical, social and mental benefits in a hospital environment.

Our little girl Iris is 6 nearly 7.  She is a lively, sociable and happy child who likes nothing better than doing cartwheels in the garden and making up dances with her friends. Her first admission into hospital was when she was about 14 months old. She became very unwell with what seemed like a fairly normal throat infection.  She didn’t respond to oral antibiotics and her condition deteriorated quickly.  She was admitted into hospital where she was given IV antibiotics and IV fluids, this was the first of many such episodes.

When Iris was about 3 she was diagnosed through GOSH with a condition which effects her immune system.  It is not an uncommon condition and it is one that they tell us she will eventually grow out of.  However it has caused her many problems.  She has had countless admissions into hospital, each time having to endure the pain and discomfort of having a canula put in so that she can receive much needed antibiotics and fluids directly into her veins.

The Whittington is just 5 minutes up the road from our house, we count our lucky stars that we live so close to such a wonderful hospital.

During the nearly 7 years we’ve spent in and out of the children's ward, I’ve become increasingly aware of their plans to improve the Children’s Play Terrace.  This is a truly vital space where children are able to escape the often-overwhelming hospital environment and play with other young patients and their families.

The hospital plans to improve and transform the current space into a specially designed therapeutic space, which will be more effective in helping children to manage symptoms and aid recovery. This transformation will provide an enriching, stimulating and accessible environment in which children can play, learn, relax, imagine, interact, create and recover. To achieve this the space will not only be refurbished, but doubled in size.

I've seen first hand the positive effects that the outdoor play area can have on Iris's recovery and recuperation whilst in hospital.  Let's help to make it a really great space for the 2000 children who are treated annually on the ward, many of whom have serious life limiting illnesses.

Please give as generously as you can.

In 2019, the Ifor Ward's Children's Play Terrace will be redeveloped, a safe space where young patients are provided with a variety of physical, social and mental benefits in a hospital environment.

Whittington Hospital Charitable Funds supports all services across Whittington Health NHS providing integrated hospital & community care services to 500,000+ people across Islington, Haringey & beyond. Please choose a ward, department or service in the community you would like to support.

Charity Registration No. 1056452
Find out more about charity fundraising