Sarcoma UK is a national charity that funds vital research, offers support for anyone affected by sarcoma cancer and campaigns for better treatments. They are the only cancer charity in the UK focusing on all types of sarcoma.

Sarcomas are uncommon cancers that can affect any part of the body including the muscle, bone, tendons, blood vessels, and fatty tissues. 15 people are diagnosed with sarcoma every day in the UK.

Sarcoma UK participates in a handful of sporting events throughout the year and out of them, The London marathon is by far their biggest fundraiser.

In 2018 they made the ambitious move to double the number of places from 30 to 60 whilst maintaining their fundraising pledge of £3,000 per entry. It was a large-scale campaign and, with a target of £212,000, it required the charity to put in double the effort to find ways of utilising the same staffing resource and budget that they had in previous years.

However, with the use of focused and segmented communications, their efforts paid off and they surpassed targets. The success led them to make the bold decision to up their stretch target for 2019 to £225,000.

“Sarcoma UK’s London Marathon team is key to the charity’s work. Together they raise enough to fund one of the three grant rounds we run every year. Creating a community that supports itself has been vital to ensure the event’s continued success and is something we will continue to build year on year.”

They began 2019 activities by creating a JustGiving campaign page, they then encouraged fundraisers to link their individual pages to it. This created friendly competition between some of the runners whilst simultaneously providing a sense of belonging.

Next, they made a closed Facebook group with access provided to both current and previous runners, plus for the first time, their marathon volunteers too. It proved to be a great idea as members shared relatable advice and support with one another, creating a true community feel. The charity’s Digital Communications Manager used his role as group admin to build important supporter relationships and to create case studies.

In order to grow the community, they ensured that all aspects of it were seamlessly linked together. For example, the Facebook URL was shared on the charity’s campaign page on JustGiving and vice versa. The Facebook group was also used to promote and live-stream The Marathon Club, an event which Sarcoma UK held for their runners at the JustGiving’s offices. The event provided community members with the chance to share tips and get to know one another better before the run.

In 2018, one of their stand out statistics was the amount raised by those fully engaged in Marathon Club. On average, the runners that participated in both the Facebook group and live event raised £1,800 more than those who didn’t get involved with the club. This led Sarcoma UK to promote the Facebook group earlier in 2019, resulting in 93% of runners becoming members - up from 53% of the 2018 cohort.

The charity credits creating a tight-knit community, along with the resources provided by JustGiving, as the key to exceeding their 2019 goals as they were able to engage with supporters in a way that they hadn’t done before. On average their 2019 runners raised around £4,000 each. 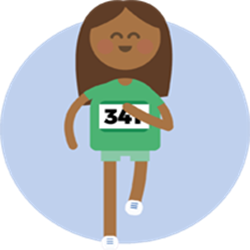