How TRIBE motivated their supporters to push themselves at the Hackney Half Marathon to break their personal best, and raise more money in the process

Put your supporters to the test

TRIBE Freedom Foundation is an anti-slavery charity with a 50,000-strong community of runners, riders and adventurers who aim to push themselves while raising funds to fight modern slavery. In December 2017 they launched the TRIBE 10% Project: Hackney Half Marathon, a Campaign designed to challenge their community to see if small changes to their training, nutrition and lifestyle could enable them to cut 10% off their Half Marathon PB. In the process, their awesome community of fundraisers would hope to raise £40,000 to help TRIBE support frontline anti-slavery projects in the UK.

Use an accessible challenge to increase participation

TRIBE's 10% challenge followed a slightly different approach to some of the challenges they have set in the past. Previous TRIBE Freedom Foundation campaigns have involved much larger challenges. In summer 2017, for example, 80 runners and riders took part in TRIBE Run for Love II. The aim was to run and ride across Europe, from Sarajevo to London, in just 14 days. 2,000 brutal km. 6 days running – 35 miles every day. 8 days biking – up to 136 miles every day.

Utilising the Hackney Half Marathon as a good all-round challenge meant that more supporters could participate, and encouraging participants to beat their PB by 10% meant that everyone's challenge was tailored to their own ability, meaning all abilities of runner could get involved.

“With a community of over 250 fundraisers, the campaign page made it much easier to keep track of the team’s fundraising effort. It really helped to create momentum during the final push and for the Matched Giving Day we had everyone in the team really engaged, constantly refreshing the campaign page to see the total rise!!”

All runners had a target of at least £100 and many raised more. In fact, the average page raised over £250. Of the 312 runners registered, 170 hit the £100 target. This means that 56-68% of runners completed the challenge, with unfortunately a large number dropping out due to injury or an inability to take part.

Think outside the box

TRIBE's 10% challenge was a completely new concept, and partnering with a running training organisation enabled them to work with their supporters to ensure they had all the nutritional and practical training advice they needed to help them beat their PB.

Events and incentives were offered throughout the Campaign to help motivate participants and helped them get to know each other outside of the training events. Some of the unique outings included a carb-loading supper club and a Matched Giving Day which created a sense of camaraderie and urgency among fundraisers. Rewards included branded T-shirts and sweatshirts when fundraisers hit milestones along the way.

Be there on the day

On race day, TRIBE had two huge meet ups for the pre-race TRIBE bar hand-out and Team Photo and the post race celebratory picnic. The whole event was captured on film for fundraisers to share with their supporters the following week.

Use a Campaign Page to bring your fundraisers together

"With a community of over 250 fundraisers, the JustGiving Campaign Page made it much easier to keep track of the team’s fundraising effort. It really helped to create momentum during the final push and for the Matched Giving Day we had everyone in the team really engaged, constantly refreshing the Campaign Page to see the total rise!

The Campaign Page was also a great chance to explain the story of the project and create a real team atmosphere. The deeplink made it much easier for people to set up their own Fundraising Pages." 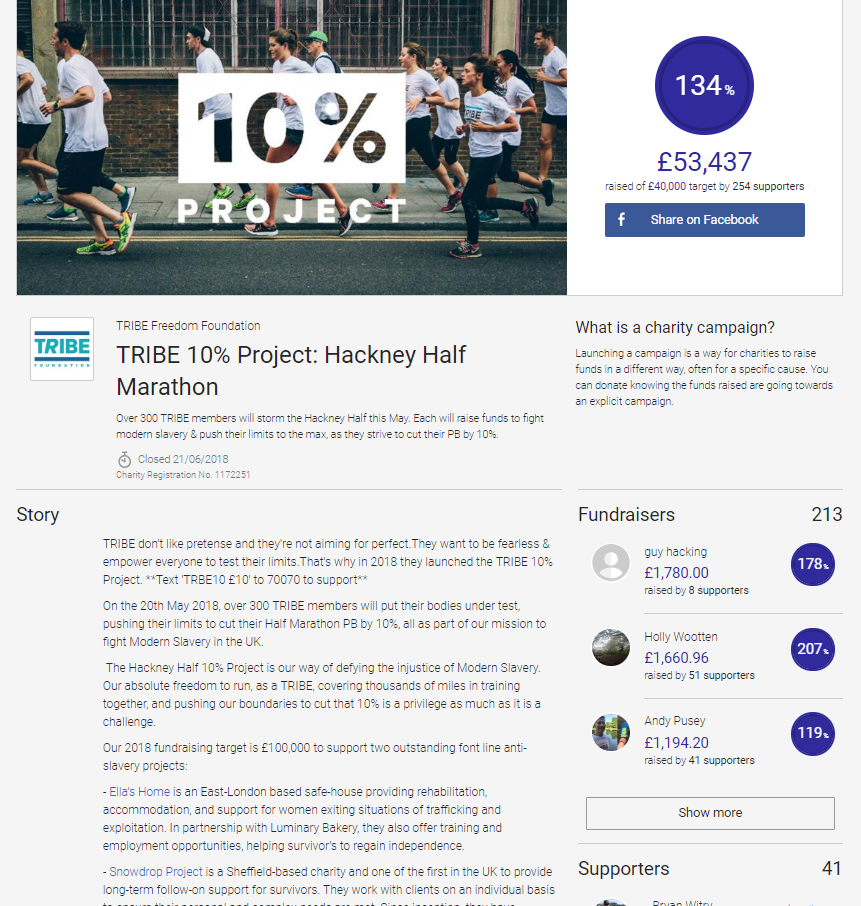 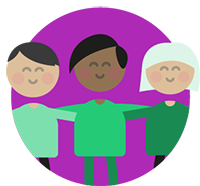 See our Half Marathon tips in our resources section to learn: