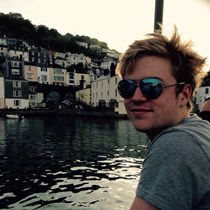 Weʼve raised £42,119 to support Ben who has lost his leg to cancer; and get him the best prosthetic limb in the hope he can return to hockey & university

Travelling home from hockey Ben felt a lump whilst rubbing behind his knee. Several weeks later the lump turned to pain which prompted him to make an appointment with his doctor and a common Bakers cyst was diagnosed.

Satisfied with the diagnosis after Googling his symptoms, he then waited 7 months for an appointment with the Orthopaedics. During this time, he continued to play hockey every week, going the whole season unbeaten! Sadly, the hospital visit revealed the small lump at the back of his knee was a tumour and was immediately referred to the specialist Robert Jones & Agnus Hunt hospital in Gobowen, Oswestry.

2 days later, after numerous scans, Ben was told he had a 14cm tumour. A biopsy soon confirmed this to be a rare bone cancer called Ewing’s Sarcoma, affecting fewer than 30 teenagers and young adults in the UK each year. From the outset we were told the prognosis was not good as the tumour had wrapped around his crucial arteries and to save his life, and give him the best chance possible, there was no alternative but to amputate his leg. At the age of 21 Ben struggled to come to terms with this emotionally and psychologically.

Ben had 6 cycles of pre-operative chemotherapy at the wonderful Christie hospital in Manchester to try and shrink the tumour and treat any cancer cells that may have spread to other parts of his body before surgery. After the amputation, he had 8 more cycles of chemotherapy to consolidate his treatment and is now carefully monitored with post-treatment scans.

The side effects of his hardcore chemotherapy were significant such as fatigue, nausea and vomiting. Ben lost his hair, his eyebrows and most of his eyelashes; his skin was pale and sallow and he had very little energy at times; a stark contrast to the good looking young man who had an appetite for life.

Sadly, there was no hope for Ben to keep his leg and his right leg was removed half way up his thigh. The operation was performed by the amazing “Mr Cool” and his team at the specialist bone hospital, Robert Jones & Agnus Hunt, where Ben spent 2 weeks in recovery and physiotherapy.

Adjuvant chemotherapy started swiftly after surgery along with regular visits to the Limb Centre whilst the residual leg healed and continued to change shape. He is now undergoing significant mobility rehabilitation and physiotherapy which will continue over the forthcoming year and is likely to have significantly impaired mobility for the rest of his life.

Thankfully prosthetics are improving all the time but whilst lots of innovation and development has been seen in replacement limbs for the Armed Forces, the same level of functionality and prosthetics are not available to civilians on the NHS. Funding a replacement leg privately is prohibitively expensive at around £75k and will need to be replaced potentially every 3 to 5 years.

Thankfully a prosthetic leg with a microprocessor knee (MPK), using an internal computer and sensors, is now a possibility on the NHS but Ben is expected to demonstrate commitment and motivation to using a mechanical leg first before being considered for this digital leg. This complex microprocessor leg provides sophisticated control enabling the user to walk with a stable and efficient gait closely resembling a natural walk.

In order for Ben to get back to competitive sport, he will require a 'blade' that allows the wearer to run and jump and overcome some of the deficiencies in other prosthetics but is not available on the NHS over the age of 18. The cost to acquire this privately is around £50k for an above knee amputee hence setting up this page.

Whilst this news has been shocking and difficult for us all to come to terms with, the combination of chemotherapy and amputation was aimed at cure. In the words of Mr Cool at our initial consultation, "1st we save Ben, 2nd we save the leg". Sadly the latter wasn't an option but we still have Ben and for that we are extremely grateful.

We’ve been through all the emotions, the anger and frustration but that's now in the past and we’re moving forward; Ben is still Ben and has shown amazing positivity. He continued to enjoy online gaming with his mates when he recovered from the effects of chemotherapy and is now able to enjoy the occasional game of snooker thanks to his prosthetic leg (although standing for any length of time isn't easy).

We are hoping he will soon get back to university to finish his degree if not this year then hopefully next. He has youth and determination on his side and we don’t doubt for one minute he will master walking again quickly and get back to sport, taking back control of his life as soon as it's physically possible.

Our focus now is on securing the best replacement leg possible to get Ben back to an active life, to hopefully return to competitive hockey and importantly continue with his studies at university, as well as financing any other costs that would help improve his situation and lift his spirits.

Cancer is expensive, especially with travel and accommodation for treatment away from home. Disability too is expensive: car conversions to a left foot drive; driving lessons for an adapted car and adaptions to the home are just some of the many costs we will face in the coming years.

Prosthetics technology is also advancing all the time so who knows what could be available in the future that could improve the quality of Ben’s day to day life.

So this is where you come in. If you can afford a small donation or are looking to raise money for a good cause please would you consider Ben, or at least in part. For those of you who know Ben personally, you will know what a fun loving person he his and a joy to be around. I'm sure you will agree he is a very worthy cause.

You can view photos of Ben and his progress on Facebook: 'Support Ben Rawson'